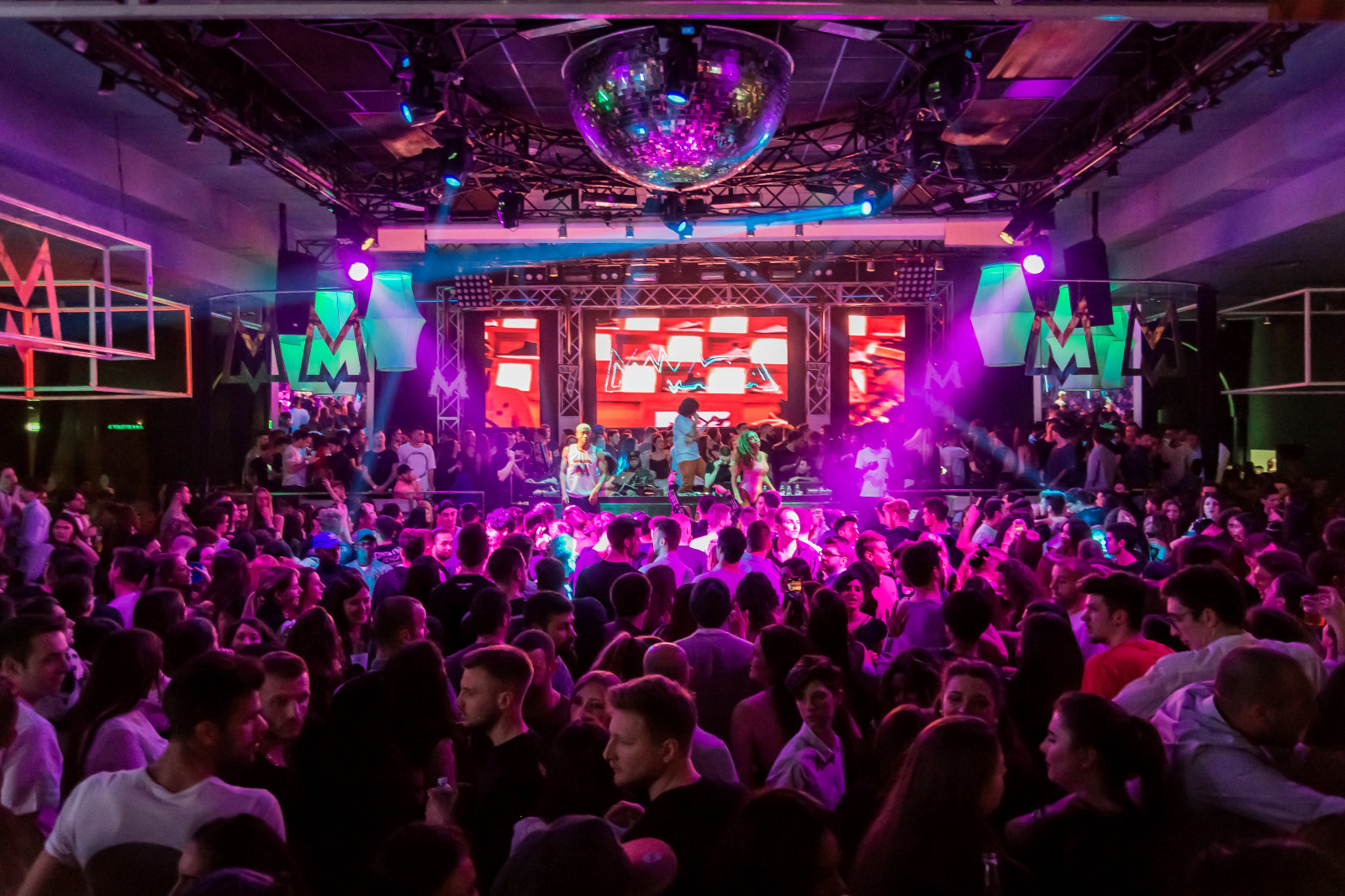 Today’s era of hyper-fragmentation raises all sorts of questions for the music industry, in particular marketing and A&R departments. In a landscape where it is harder than ever to have a mainstream impact, how do you drive culture? How do you break artists and build superstars? What will peak success for the next generation of artists even look like?

The framework we need may have been here all along. Scenes have always existed, like the UK punk scene of the ‘70s and the rave scene of the late '80s / early '90s. But thanks to the fragmentation of consumption and rise of hyper-targeted algorithmic personalisation, internet-era scenes are splintering and becoming much less uniform. Understanding these new types of scenes and music’s role within them can help unlock fandom, although it may mean altering our definition of success. This is the subject of MIDiA’s latest report, “Scenes: A new lens for music marketing”.

As consumption fragments, audiences are pulling from a wider range of inputs than ever to form their identities — including music, as well as film / TV, fashion, social media, and basically anything that can be accessed online. Algorithms accelerate this fragmentation by pushing consumers deeper and deeper into hyper-specific niches, as anyone who uses TikTok can attest to. Even though those niches may have relatively small followings, the internet allows them to reach global scale.

The result is that scenes are becoming more complex and splintered. Consider the seemingly endless range of subcultures on TikTok, from #cottagecore to #EGirl, or the Instagram account @starterpacksofnyc, which has garnered more than 64,500 followers by crystallising super-specific, yet eerily-familiar, personality types.

So, four steps have led to the rise of internet-era micro-scenes:

Scenes are the new territories

Music-driven scenes have always existed, and will continue to (e.g. hyperpop). But music is often just one element of today’s scenes — it may be thought of as the scene’s soundtrack, and artists as scene icons. Within scenes, an artist’s identity is often just as important as their sound, if not more. For example, even though neoperreo — an emerging sub-genre of reggaeton — is a genre-driven scene, its artists share an ethos of inclusivity, gender equality, DIY, and community, not to mention a shared style characterised by neon colours and Y2K fashion. All of these elements are equally important to the scene’s members.

Fragmentation means that superstars are having less impact (more on that next), but the good news is that niche audiences are typically more engaged than the passive masses anyway. Knowing this, music marketers and A&Rs can begin treating scenes as the new “territories” in which to develop talent, nurture fandoms and unfold campaigns: by first targeting a tightly-defined scene, and then pushing out to wider concentric circles of adjacent scenes. In short, scenes require a bottom-up approach, rather than top-down one. This also means that marketers must begin to consider not just audience demographics (like age and location), but also psychographics (like values and aspirations).

What does this mean for superstars?

Fragmentation benefits the middle tier most. Long-tail artists will still struggle to break through the noise, and superstars will have less of a mainstream impact, but mid-tier artists can become cult stars within their scenes.

Of course, superstars continue to exist, and many are still riding the wave of the success they built in less congested, less fragmented times. But they are not achieving the same level of success as they used to. Taylor Swift’s U.S. album sales have steadily declined since her debut in 2006 — and although the practice of buying albums is itself in decline, superfans continue to purchase them, and these metrics still serve as an indication of fragmenting fandom. 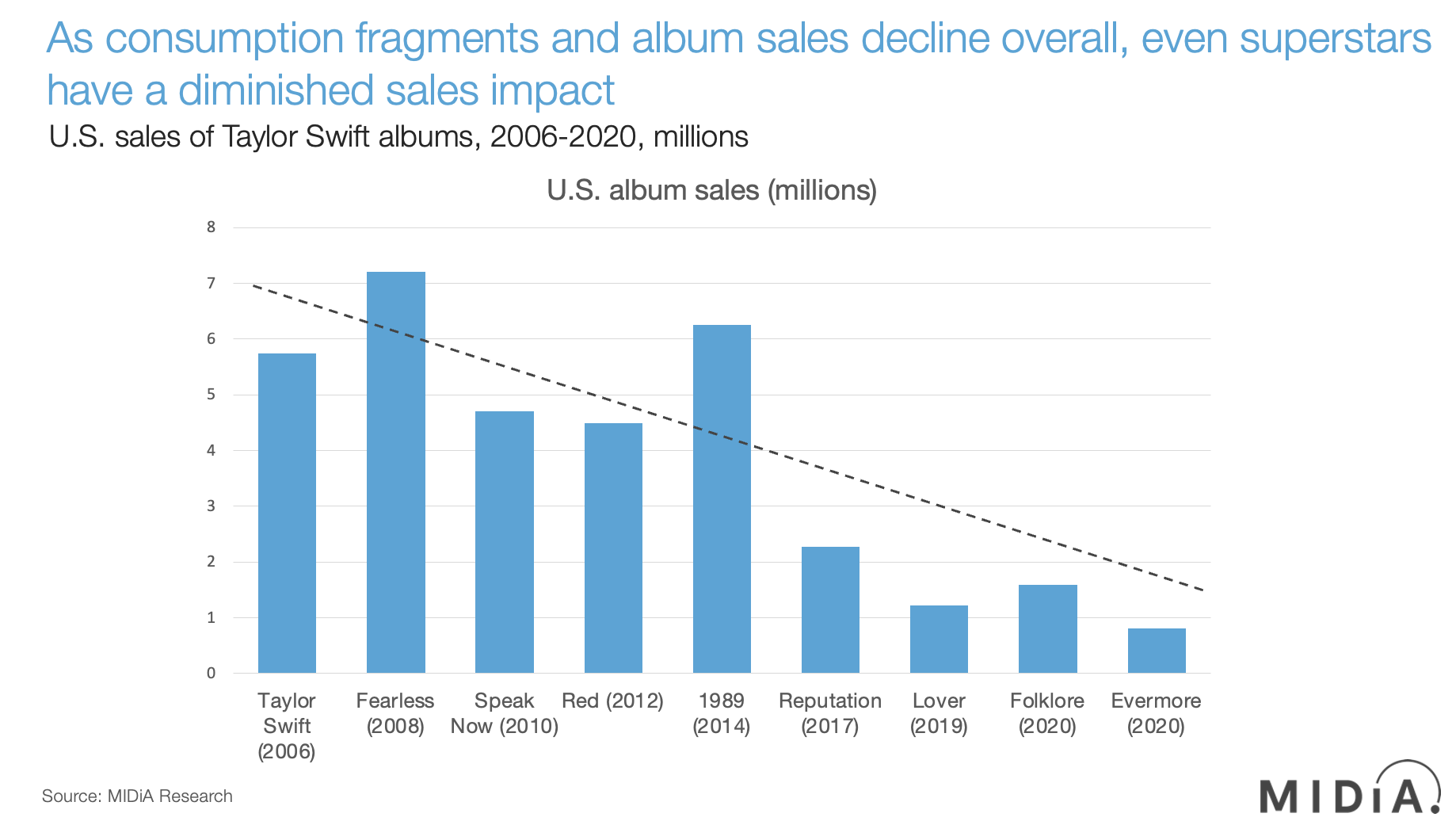 The music industry of the past was dominated by a handful of stars. In the future, superstars will likely exist alongside many more, smaller, cult stars for different scenes. Labels, which have for so long been top-heavy, may shift to allocate resources more evenly across the roster. We are also already seeing the invention of new roles (e.g. community manager) to cultivate smaller, but more engaged, groups of fans (should “scene forecaster” be next?).

Superstars will still have an impact, but it will be harder to quantify. They are essentially trading mainstream, casual reach for smaller-scale — but stronger — cultural impact. Measuring this impact is less about first-week album sales and streams, and more indications of active listening, from a song to a playlist to recreating or remixing the music. It will also depend on how the music transcends, well, music itself — how deeply it seeps into memes, late-night TV skits, language, and even fashion trends. Fragmentation does not need to spell doom for the hits-based music industry. Instead, its effect on superstardom may mean going back to basics: creating music that moves culture, however fragmented that culture is.

MIDiA's new report, "Scenes: A new lens for music marketing", is available for clients here. If you are not yet a MIDiA client and would like to find out how to access this report, please email stephen@midiaresearch.com.

by Ben Woods
18 Oct 2022
As we travel deeper into the era of entertainment saturation, video streaming services are facing some uncomfortable truths.Maintaining and securing audiences by green-lighting expensive series based on...
No thanks