Why Video Is King in the Peak Attention Economy 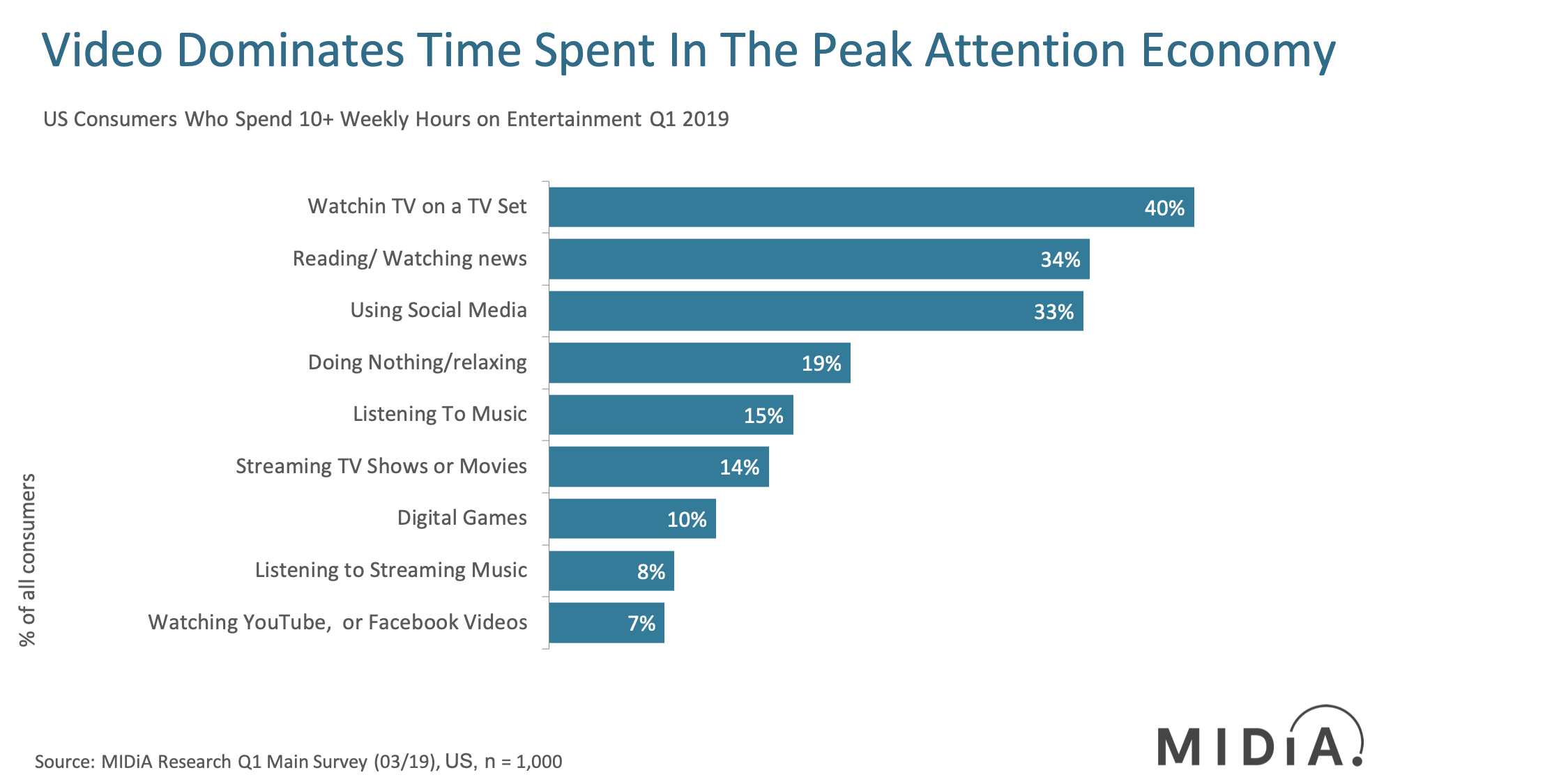 As we move firmly into the peak attention economy, the value proposition of entertainment is becoming increasingly nuanced. While consumers have dramatically made the switch to digital consumption following on from the smart phone revolution post-iPhone launch 12 years ago, trends forged in the analogue era still dominate entertainment consumption.

The undisputed king of entertainment in the US remains the TV set. In Q1 2019, 40% of US consumers spent 10 or more hours per week watching TV on a TV set. The nearest digital competitor for time spent was social media at 33%. The TV set’s digital streaming successor saw strong growth through subscriptions in the US – all the top five US streaming video on demand (SVOD) services saw double digit growth in subscriptions from Q1 2018 to Q1 2019. However, streaming still lags a full 26% behind traditional TV consumption for 10+ weekly hour viewing in Q1 2019. To quote Bill Gates:

However, the famous quote ends with:

“…Don't let yourself be lulled into inaction."

TV is transitioning into video – and together the newly forged medium has an inherent advantage over all other competing digital media demands, the legacy of half a century of ingrained TV consumption. In the peak attention era, this becomes a near unshakeable advantage for video.

With 77% of the US population over 18, and with live expectancy rates projected to continue to grow, the majority of the US population for the foreseeable future will be a TV-attuned culture raised on the appointment to view the world of linear TV. For the aging majority of the US population, a show will always be a TV show because the technology was inextricably linked to the medium. Since the 21st century however we have witnessed the rise of digital video where the entertainment medium is distinct from the that of the technology used to view it. This paves the way for the profoundly significant transition of the world’s most important cultural and entertainment medium from front and centre of the analogue era to front and centre of the digital era.

The sheer cultural momentum behind TV will drive video increasingly to the fore in the digital economy as it comprises two key unique selling propositions (USPs) essential for mass market engagement:

In the peak attention era, where there is no more free time left for digital services to tap into and where everyone is competing for everyone else’s audience engagement, video’s two USPs provide it with an unparalleled competitive advantage. The challenge for all video direct to consumer (DTC) services is how to leverage engagement market share gain from the incumbent competing media offerings without over-investing in content and while cutting through the virtual static noise that reverberates across the digital economy in 2019.