For decades, rights holders have prioritised (and relied upon) exponentially increasing broadcast revenues as a mechanism for sustainability and growth, a legacy approach that is in dire need of a review with ‘D-day’ for sporting rights upon us in 2021.

Chasing revenue rather than reach has led to the creation of a demographic cliff for sports viewing audiences, and an inflection point is approaching. In Q3 2020, less than 10% of those who watched live sports on TV in the US were aged 16-24, with around two-thirds of this audience aged over 45 (source: MIDiA Research*), highlighting the risk associated with rights holders continuing in the same vein. 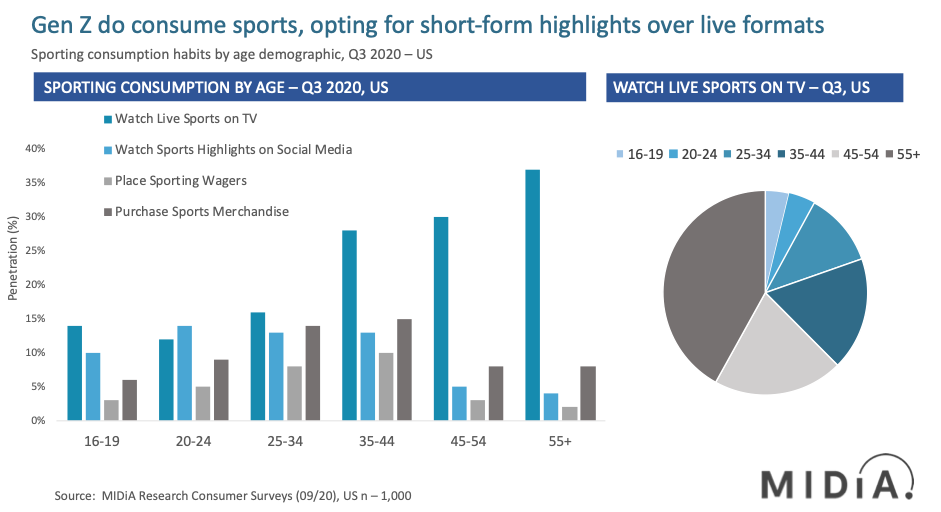 Outside of the pandemic expediting the need for rights holders to build out digital engagement beyond the pureplay broadcasting of live sports, the viewing format is crying out for a revamp. Driving this need for change is the weakened viewing spectacle attributed to the fans’ prohibited attendance, which results in sporting events devoid of atmosphere and thus significantly weakens sports as an overall viewing proposition.

The pandemic exposed sports as a vulnerable asset with the likelihood of continued disruption and sporadic postponements, impacting the valuations broadcasters place on previously premium rights. Rights holders specifically in the US are prioritising digital innovation to experiment with alternative distribution mediums but also testing the appetite among the younger future sports fans. Speaking in March last year, NBA commissioner Adam Silver spoke about the leagues’ intention to capture the ‘cord-nevers’, those consumers who have never paid for pay-TV subscriptions, which is where the majority of domestic rights have been awarded.

As Silver submitted, the average time viewers spend watching an NBA game is 32 minutes, 16 minutes shorter than the length of a game. The NBA is intent on innovating and making broadcasts interactive, leveraging advancements in digital technology, ultimately driving in-game fan engagement to retain and attract new fans. Dispelling the notion that Gen Z simply do not watch sport is important to the NBA, rather appreciating that they simply consume it differently, over-indexing for short, non-live formats.

Last weekend saw the NFL’s Wild Card playoff round take place. In a league first, the NFL aired a kid-friendly broadcast on Nickelodeon for Sunday’s game between the New Orleans Saints and Chicago Bears, averaging 2.1 million viewers, making it the most watched programme on the kid’s channel for almost four years. The supplemental coverage ran alongside the main broadcast on CBS, featuring guests explaining the rules, on-field graphics and virtual filters, including slime cannons that were set off following touchdowns.

The timing of this was no coincidence. Including this experiment to engage with a new, younger audience, the overall viewing engagement for the Wild Card round was down 13% compared to last year. With rights holders fearing a loosening grip on Gen Z, in moves to mitigate the ageing audience, the NFL is contemplating its long-term, lucrative domestic broadcast offers.

The NFL, the most popular sport in the US at 44% fandom in Q3 2020 (source: MIDiA Research*), has experimented with digital partnerships for several years. Streaming live games firstly through Twitter and now Amazon (including Twitch) has enabled the world’s most valuable league to experiment and target the younger demographic on different platforms.

Outside of live sports, the NFL has also invested heavily in the gaming, virtual opposition in Madden NFL as well as into other ecosystems such as Fortnite. Other areas of innovation include licensing its gameday apparel to be worn as purchasable skins to commemorate Thanksgiving, which broadens its reach and future-proofs its fanbase in the process.

These digital and innovative collaborations allow the brand to invest in its future, while experimenting with future distribution channels, with the prioritisation of establishing connectivity with Gen Z becoming a growing prerogative. With 2021 and ‘D-Day’ for sporting rights upon us, a year zero for the new sports format is beginning, with technology driving innovation to generate a heightened level of engagement, changing the viewing experience for consumers.

* This blog precedes MIDiA’s upcoming February report How sports could miss the Gen Z opportunity: capturing the cord nevers, providing more extensive and recent data. To find out how to access the report, please email colette@midiaresearch.com

by Tim Mulligan
2 Dec 2020
The digital revolution has not been kind on the print magazine industry. In the pre-digital world media power resided on access to coverage on the front pages of style and culture arbiters such as Vogue…

by Alistair Taylor
6 Nov 2020
The Sinclair Broadcast Group reported its Q3 2020 results earlier this week, which highlighted the detrimental impact sporting investments had on its balance sheet. A 37% year-on-year (YoY) increase in…

by Keith Jopling
28 Oct 2020
In our recent report The Rising Power of UGC , in association with Audible Magic we identified that the music industry could unlock as much as $6 billion in revenues from UGC by 2022. Such an outcome would…
No thanks