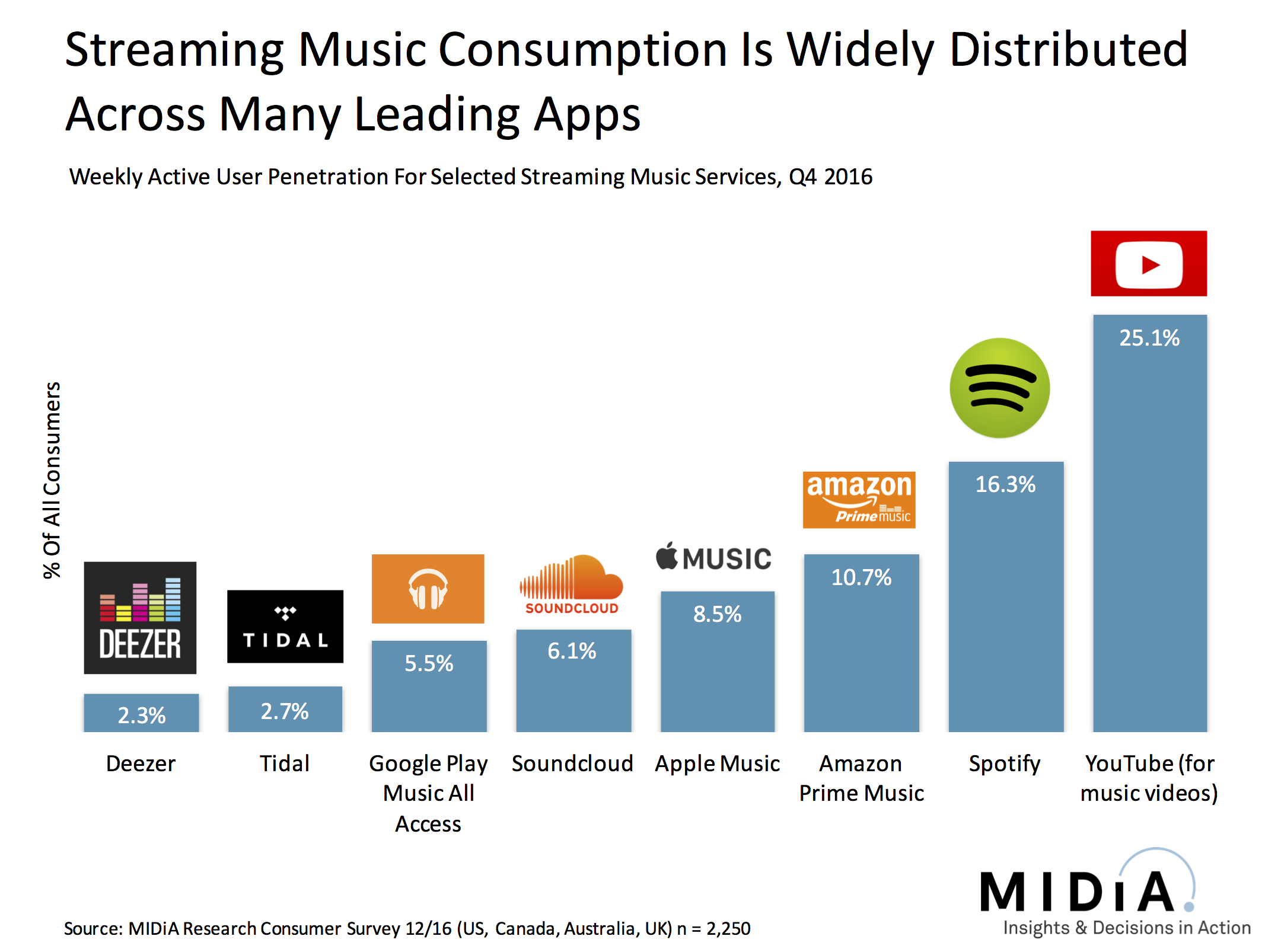 At MIDiA Research we are currently in the final stages of producing the update to our annual landmark report: The State Of The Streaming Nation, a report which compiles every streaming market data point you could possibly need.

In advance of its release in June we want to give you a sneak peak into a couple of the key areas of focus: streaming app usage and major label streaming revenue.

Subscriber numbers only tell part of the streaming story. They are solid indicators of commercial success, but can often obscure how well a service is doing in terms of engaging its user base. That’s why we track the main music services’ active user bases every quarter. But rather than tracking Monthly Active Users (MAUs), we track Weekly Active Users (WAUs). The MAU metric is past its sell by date. In today’s always on, increasingly mobile digital landscape, doing something just once a month more resembles inactivity rather than activity. The bar needs raising higher. Companies like Snapchat, Facebook and Supercell measure their active user bases in terms of Weekly Active Users (WAUs) and Daily Active Users (DAUs). It is time for streaming services to step up to the plate and employ WAU as the benchmark.

Using this approach, YouTube and Spotify emerge as the leading services with 25.1% and 16.3% WAU penetration respectively. However, at the other end of the spectrum, Deezer swaps its top half of the table subscriber count ranking for the bottom ranking for WAUs with just 2.3%. Google Play Music All Access does not fare much better on 5.5% and even this likely reflects survey respondent over-reporting for what has proven to be a lacklustre effort from the search giant.

Streaming music finally returned recorded music revenue to sizeable growth in 2016, driving the year-on-year growth of 6%, increasing revenues by $0.9 billion. Label streaming revenue was up $1.6 billion, finally offsetting the impact of declining revenue from the legacy formats of the CD and downloads.

The growth continued in Q1 2017, albeit at a slightly slower rate. Among the major labels, streaming revenue grew by 35% to reach $1.1 billion in Q1 2017, up from $0.8 billion in Q1 2016. The major labels respective share of cumulative revenue in streaming largely reflects that of total revenue. Streaming was the lynchpin of 2016’s growth and will be even more important in 2017.

Streaming represented 33% of major label revenue in 2016. That share rose to 42% in Q1 2017. Streaming is now the stand out revenue source, far outstripping physical’s $0.6 billion. Though a degree of seasonality needs to be considered, the streaming trajectory is clear. Record labels are now becoming streaming businesses. The independent label sector experienced strong streaming growth also, powered in part by licensing body Merlin. Merlin paid out $300m to its independent label members over the last 12 months, leading up to April 2017, to an increase of 800% on the $36m it paid out in 2012. The streaming business is no longer simply about the likes of Spotify and Apple Music, it is the future of the labels too.

These findings and data are just a tiny portion of the State Of The Streaming Nation II report that will additionally include data such as: streaming behaviour, YouTube, role of trials and family plans, playlist trends, average tracks streamed, subscriber numbers for all leading music services, service availability, pricing and product availability, revenue forecasts and user forecasts. The report includes data for more than 20 countries across the Americas, Europe and Asia and forecasts to 2025.

To reserve your copy email Stephen@midiaresearch.com.

Mark Mulligan
22 Jul 2017
We have access to other numbers which show the subscriber numbers of various services.
Chuck
18 Jul 2017
Google released these numbers where and when? They have never released their numbers. You clearly made these up.