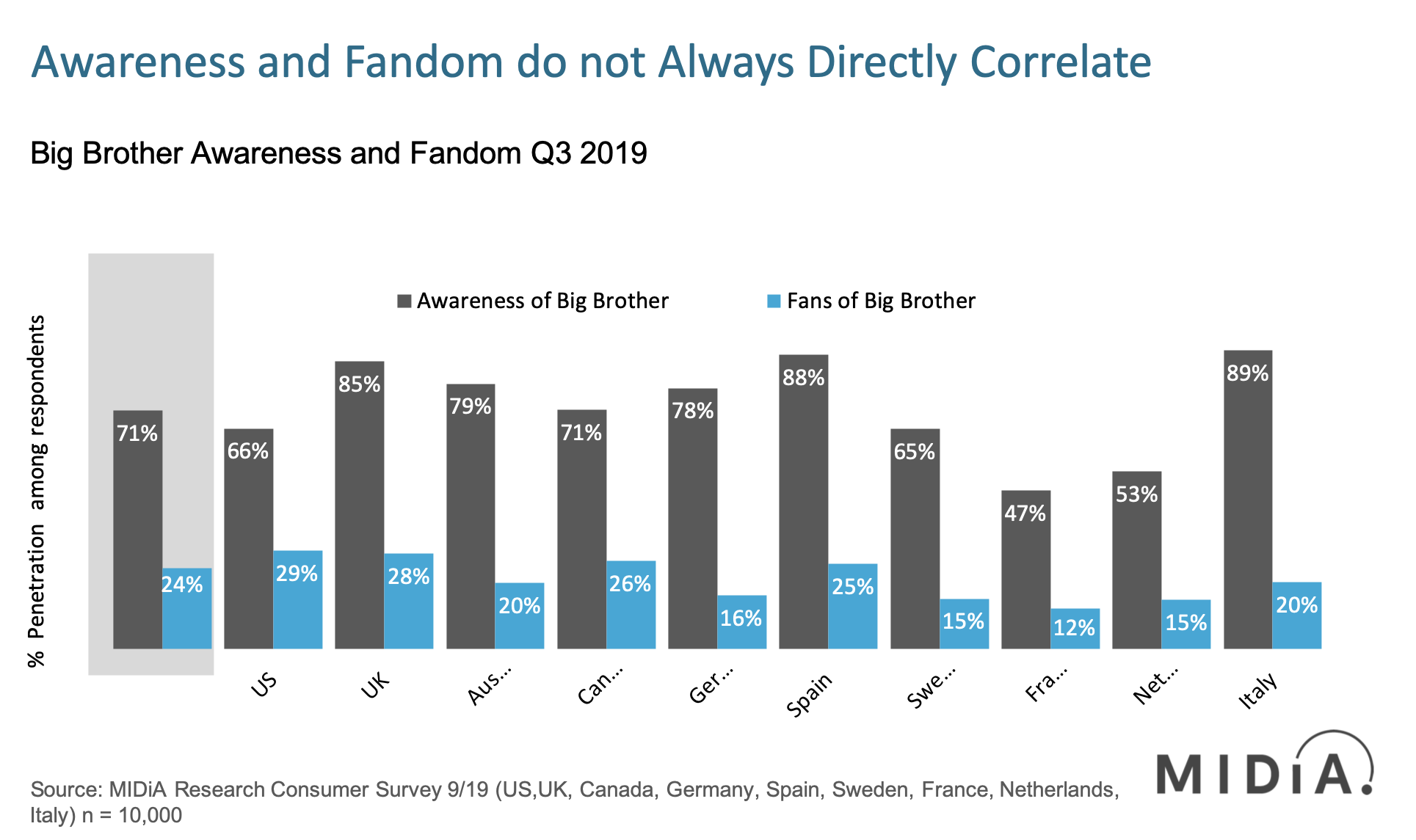 With Vivendi-backed Banijay on the verge of acquiring Endemol Shine this week, we are entering a new era of monetising fandom in the on-demand streaming era. Banijay is reportedly offering $2.2 billion to acquire the Disney/Apollo-owned production company famous for producing hits for two very different eras – the linear TV hit reality show Big Brother and the dystopian Sci-Fi streaming anthology hit Black Mirror. Part of the reason why the iconic company is for sale resides in its price tag – of the €2 billion ($2.2 billion) allocated to the acquisition, €1.75 billion is to cover the cost of the outstanding debt owed by the production company. While the company has returned to form with securing global distribution for Black Mirror through Netflix (a show which has been laser-targeted at streaming audiences, as covered in MIDiA research’s keynote at MIPCOM last week), it has however noticeably struggled to adapt proven appointment-to-view models into the digital era.

As the above data from MIDIA Research’s Q3 2019 survey data shows, a linear hit show while generating significant brand awareness (80% of video revenues are still derived from linear where the majority of viewing still takes place) does not necessarily see that awareness directly correlated into fandom. Case in point – Italy is the market with the highest level of awareness at 88% for discontinued Endemol hit Big Brother. However, fandom is only 20% in Italy. Mexico, on the other hand, has the highest percentage of show fans, with awareness at 87% yet fandom at 88%.

The disconnect between awareness and fandom for Big Brother therefore highlights two big challenges for linear-era production companies adapting to the streaming landscape:

1. How to replicate the marketing reach of linear into the digital era

2. How to close the gap between awareness and fandom

Banijay might reignite the Big Brother brand as a digital asset

Big Brother became a key driver of the cultural zeitgeist in the first two decades of this millennium because it was fortunate enough to be aired in the era of peak linear TV. Despite the show having being cancelled, the strong reservoirs of fandom among markets as diverse as the US, Spain, and Australia suggest that there would be scope for reimagining the show as a streaming asset for Banijay. To do this the new owners of the asset would have to irrevocably break with the analogue linear model and fully embrace the rapidly evolving ecosystem of linear ad-supported video on demand (AVOD). Linear AVOD, while in its infancy, is gaining traction as a way for traditional ad-supported broadcasters to monetise on-demand digital audiences through using linear content as a jumping off point for deep-diving into on-demand ad-supported content. The basic premise is that a linear flagship show allows new audiences a compelling reason to engage with familiar live content through a new AVOD app from the get-go, then can be encouraged to deep-dive into the content library programmed around the flagship shows. The role of linear and digitally relevant ad experiences was a key part of the discussions among the panellists at MIPCOM last week.

The ability to integrate social functionality into a linear AVOD service provides the consumer use case for live interaction, which was initially famously trialled by NFL Thursday Night Football live streaming on Twitter in 2016. What show in living memory has generated more water-cooler commentary than the antics of the various Big Brother households?

If Banijay has the boldness of vision to make a relaunched Big Brother a linear AVOD staple, then expect the likes of the NBCU’s The Voice, ITV’s Love Island etc. to rapidly follow the new format – reimagination for unscripted TV. However do not rule out Facebook being an active participant in this process- as the global social hegemon- Facebook is best placed to deliver both mainstream digital audiences and the best-in-class target advertising for advertisers. Who knows maybe Facebook might even starting a bidding war with Banijay for Endelmol Shine itself…