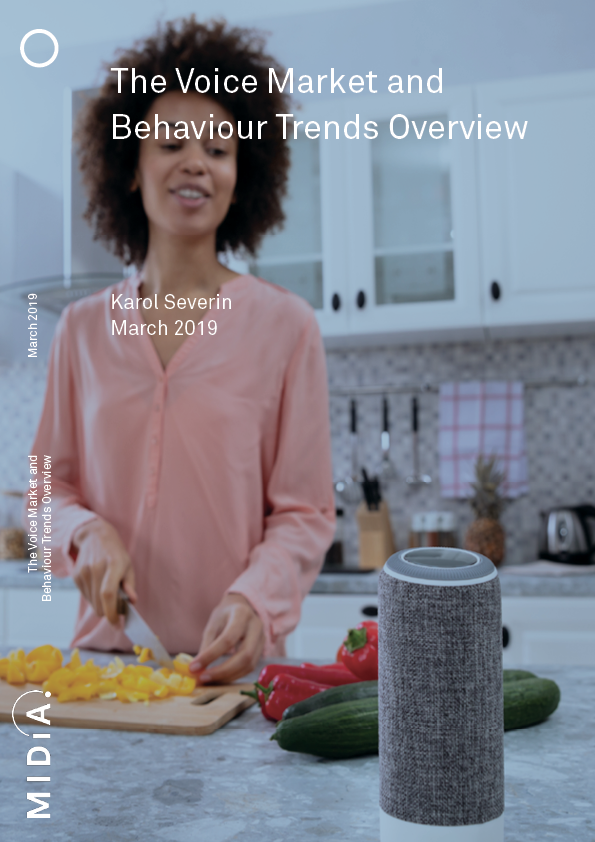 This article is derived from MIDiA’s Voice Market and Behaviour Trends Overview report.

The use of voice command continues to be niche, with overall consumer penetration at a mere 9%. Predominantly that usage is on smartphones, with “asking for directions” one of the key use cases. However, there is growing engagement and with propositions from Apple, Google, and Amazon for integration of voice command in the home, there is opportunity for the market to develop and grow substantially.

Voice usage in the digital economy

Voice command functions best for passive behaviours, like asking for information (such as directions), controlling in-home devices, and playlist or radio selection. In-home voice speakers vary in their market penetration. Some markets such as the US and UK see Amazon Echo dominate due to its early entry into the market, while others such as Sweden see overall resistance to voice speaker usage due to higher privacy concerns. Younger demographics over index for voice speaker ownership, although certain offerings have higher penetration in older and more affluent markets.

Amazon Echo dominates the voice activated speaker market. This is due in many cases to its early mover advantage, with later-entry markets giving a better indicator of the competition Amazon will face as it expands. Google Home has the lead in Brazil, while the Apple Home Pod has the smallest penetration but is also the latest entrant to the market and, in line with the brand, is a premium priced product. Google and Apple voice speakers are most likely to remain parts of the greater tech ecosystems of each; Amazon Echo, however, has the potential to become the centrepiece of Amazon’s commercial ecosystem.

The future of voice usage in the home

As more consumers seek an escape from their screens in the oversaturated attention economy, voice speakers in the home could see growing popularity to accomplish tasks such as appliance control, music selection, and information requests. The Google Home and Apple Home Pod propositions function as extensions of each brands’ existing tech ecosystem, and as such can expect to retain certain audiences. Amazon’s platform-agnostic proposition, however, could tempt consumers more. Ultimately, the voice market is currently small, but there is room for growth as market penetration increases and further patterns emerge as to how consumers use voice and how best speakers can be developed to suit their needs.

The full Voice Market and Behaviour Trends Overview report is available to subscribers here. Others can purchase the report here, or email stephen@midiaresearch.com to inquire.