The NFL and Pizza Hut: Future-Proofing with E-Sports 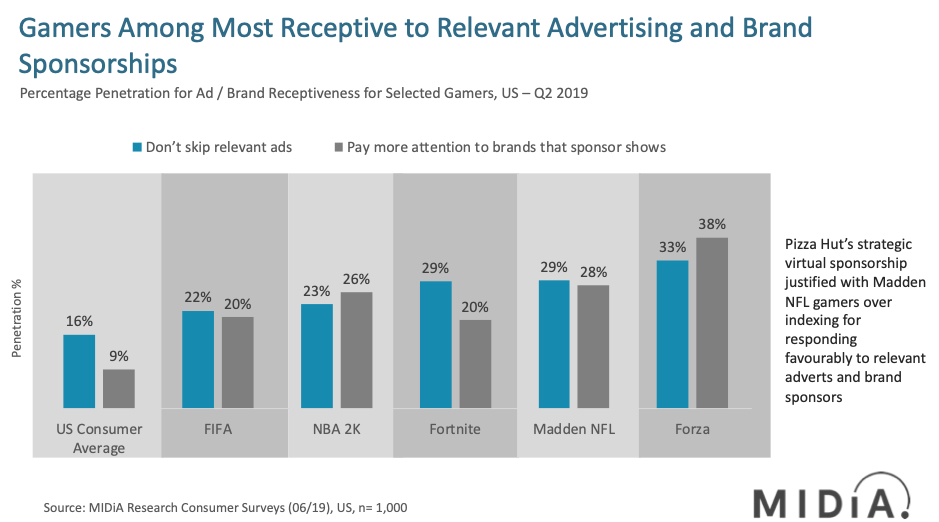 While sharing pizza has already become synonymous with watching sports, e-sports could be about to leverage that same instilled behaviour. Restaurant chain Pizza Hut made history this July when it became the first brand to secure naming rights for a virtual football stadium in an agreement with Madden NFL creator EA Sports.

The deal grants Pizza Hut exclusive sponsorship of the virtual stadiums used to host the EA Sports Madden NFL 20 Classic tournament which took place from August 30th to September 1st. Resembling a real-world NFL stadium, the virtual venue received Pizza Hut advertising and pitch side-hoarding. While the debate for jersey advertising in the NFL rages on, EA Sports will not compromise on authenticity, therefore not opening up jersey sponsorships within Madden.

Why is this a big deal?

Sponsorship deals within e-sports are nothing new, but opening up avenues to incorporate sponsorship within a game, much like product placement within content, creates additional revenue streams for producers and rights holders, addressing hard-to-reach consumers positioned behind paywalls. Vida Mylson, senior director of global brand partnerships at EA Sports, told SportsPro Media:

“The NFL and Pizza Hut have partnered since 2018 and with that there’s a natural progression of finding a new way to reach a really unique audience in the gaming space.”

Addressing young male Madden players is an NFL prerogative for future-proofing its fanbase, something EA intends to support. With 77% of US Madden players in Q2 2019 being male, and 20% being males aged 16-24, this is a key demographic for the ‘real’ NFL to target and retain as fans (source: MIDiA Research). Understanding where this demographic lives outside of Madden is an arguable imperative for the NFL. With only 31% of this demographic engaging with Amazon Prime Video on a weekly basis, the Thursday Night Football (TNF) package is unlikely to gain sufficient engagement from this specific consumer segment, compared to the 69% of which use YouTube weekly, an increasingly important insight for the NFL in the run up to 2020 when Amazon’s TNF deal comes up for renewal.

Targeting the most valuable consumers who primarily exist behind paywalls on ad-free subscription services is an increasingly pressing challenge for brands. Fewer consumers can now be reached through linear verticals due to declining pay-TV engagement and households paying for pay-TV subscriptions declining in the US from 51% in Q2 2017 to 35% in Q2 2019 (source: MIDiA Research). With 38% of US consumers paying for a subscription video on demand (SVOD) service, reaching the most valuable customers has become increasingly difficult with the majority of SVOD services employing an ad-free subscription model. Much like Tencent has been experimenting with inserting advertising within content, virtual advertising offers a potential avenue for traditional, primarily linear advertisers.

Gamers more so than sports fans are receptive to relevant ads, underlining the importance of incorporating sports-related sponsorship into gaming content. Only 9% of US consumers pay more attention to brand sponsors than to the ads themselves; this rises to 12% of general sports content consumers, and 18% among console gamers (source: MIDiA Research). Pizza Hut’s strategic sponsorship of Madden NFL looks smart. Expect other games titles, not just e-sports, to follow suit.

While e-sports get the lion’s share of media coverage as an attractive growth area in the gaming space, they are just a subset of the much larger market of games related video consumption (which includes non-competitive content). 3% of US consumers attend e-sports events. 15% of consumers watch videos of gamers. 29% watch games related videos (source: MIDiA Research). A few years ago, this type of brand partnership would be largely about providing value through only reaching consumers who own the game. Today, however, the ROI of such sponsorships is arguably much higher, because it reaches additional audiences (beyond the games’ title owners) via broadcast and/or streaming coverage. E-sports take the reach further, but there is even more to be said for the opportunity this provides for future iterations of official sports video games. While there are authenticity guidelines and policies in place, there is an opportunity to include additional virtual stadiums within more arcade/fantasy-based games modes. There is added value for sponsors, as vloggers interested in the game create gameplay-related video content which goes way beyond just e-sports content (be it walkthroughs, live streams, tips and tricks, review videos, etc). Broadcasting those on the likes of YouTube, Twitch or Mixer significantly increases the impact of such brand partnerships. It goes beyond just the gamer segment, through to the much broader fan segment. Therefore, brands should be increasingly interested in deploying the right product placement campaigns into the relevant games – not just for titles that are popular within e-sports, but just as (or more) importantly titles which are popular in the vlogger communities.

With sporting rights valuations reaching an inflection point, the virtual aspect could be the next big growth story for revenue generation. EA Sports has not ruled out incorporating this virtual advertising into other franchise titles, with the next FIFA eWorld Cup offering a perfect opportunity to test the virtual appetite within e-soccer. As e-sports continue to grow, finding unique and creative ways for brands to target valuable consumers will become easier simply through opportunity – and as competitors arrive on the scene, will become the distinguishing case for keeping them.

This blogpost was co-written by Alistair Taylor (MIDiA’s lead sports analyst) and Karol Severin (lead games analyst). MIDiA analysts across all coverage areas engage in constant cooperation and knowledge exchange to cater to the growing needs for cross-entertainment insight and holistic understanding of consumer attitudes and behaviours across their media and entertainment lives, as the ongoing media consumption landscape consolidates into all-encompassing digital attention ecosystems.