The Challenge for Global D2C Growth in 2020 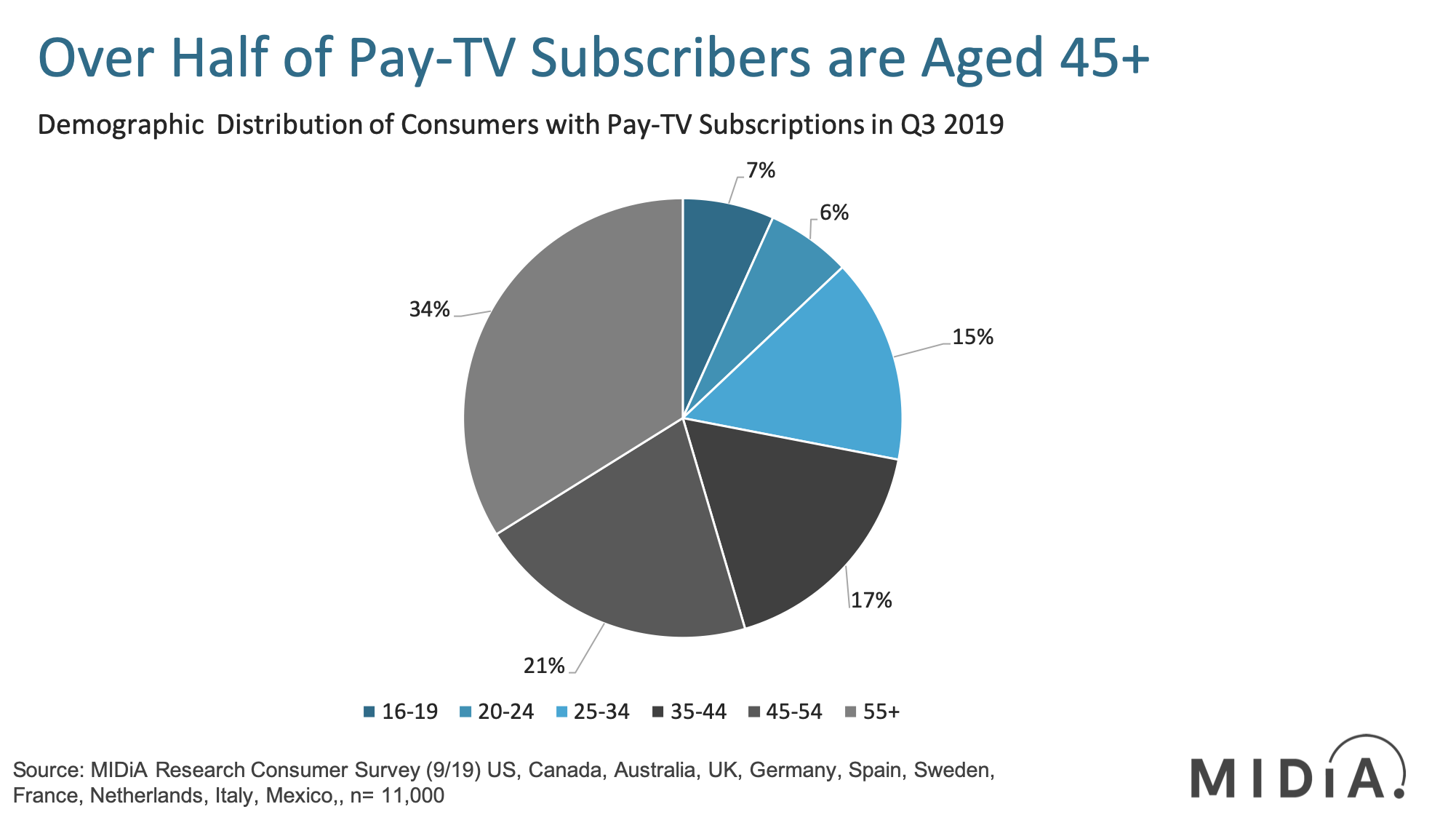 2020 promises to be a big year for direct-to-consumer (D2C) services, with Warner Media’s HBO Max and Comcast’s Peacock set to join Apple TV+ and Disney+ in the battle to win streaming audience share both in the US and beyond. While all four parent entities are US based and indeed represent the heavyweight reach of the US as the home of leading content and distribution capabilities, the true war for D2C supremacy will be fought beyond the shores of America. The key to winning this generational battle will be less about taking market share from incumbent subscription video on demand (SVOD) services such as Netflix and Amazon Prime Video, and more about unlocking new audiences as digital consumers. And the most valuable consumers within this group are amongst the existing deep pool of global pay-TV subscribers, who are currently teetering on the edge of becoming default digital consumers.

As the above chart shows, pay-TV has a demographic time-bomb on its hands. Over half of pay-TV subscribers across the 11 markets surveyed in MIDIA Research’s Q3 2019 survey are over the age of 45, with 34% being aged 55+. The cord-cutting phenomenon has been underway since the first significant non-renewals of expensive, high-margin pay-TV contracts came to light in Disney’s 2015 ESPN numbers released to investors. However, cord cutting has focused on the younger digital natives who have been savvier about the digital alternatives to traditional pay-TV options and are familiar with an on-demand delivery and consumption experience. Nevertheless, with SVOD penetration in Q3 2019 at 43% across the 11 markets surveyed, streaming alternatives to traditional pay-TV are now borderline mainstream. As such, the challenge of convincing older demographics to buy into a streaming services as a cheaper, more convenient and more flexible substitute for their existing cable and satellite packages is becoming steadily easier.

Winning over the older demographics comes down to familiarity and convenience. Apple has it its existing device and OS ecosystem alongside its integrated billing functionality to turbo-charge adoption of Apple TV+. Disney has decades worth of brand recognition to draw upon. Comcast has an extensive integrated distribution network alongside established content assets to gain market share. Warner Media has parent company telco behemoth AT&T to deploy its D2C billing and distribution assets, leveraging its portfolio of key content brands. All are hooks towards gaining market share and establishing a claim on the most valuable subscribers, in what will become a land grab likely to bypass the current leaders in SVOD who have failed to substantially win over these older demographics due to their to-date failure to make the case for being substitutive services providing the same breadth of coverage across scripted drama, film, news and sport as traditional pay-TV. The new D2C services which can effectively leverage their existing relationships with older consumers by offering the same breadth of content will be the ones most likely to gain global market dominance in the 20s.