The 2 Spotify Charts You Need To See 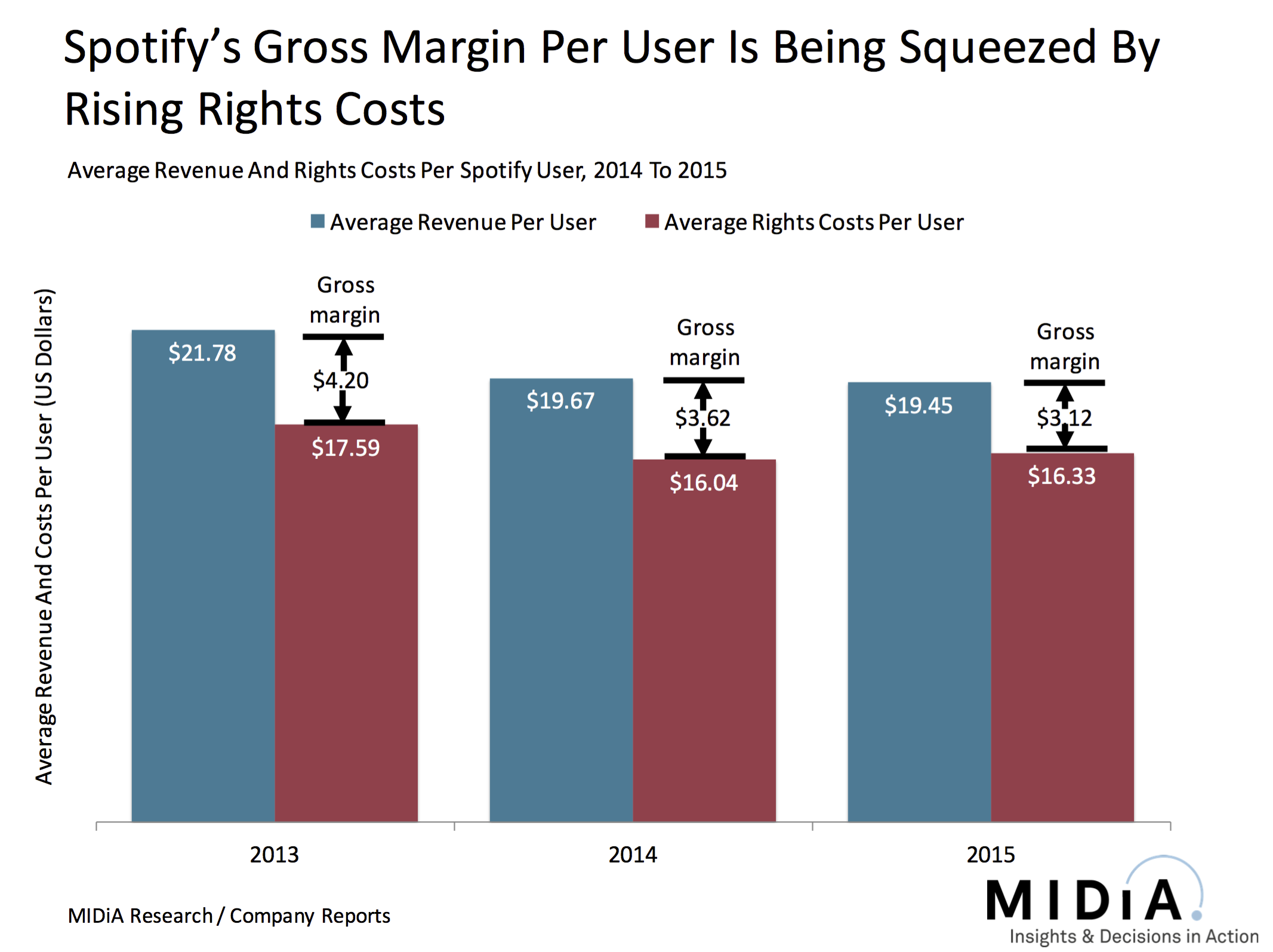 Tuesday’s media scrum around Spotify’s financials illustrate that whatever ground Apple and Tidal may have made in recent months, Spotify clearly remains the poster child / bellwether for streaming. The stories oscillated between the broken nature of the underlying economics to how streaming is the future of the music business. Both are true. But a closer look at the numbers reveal some even more important findings. 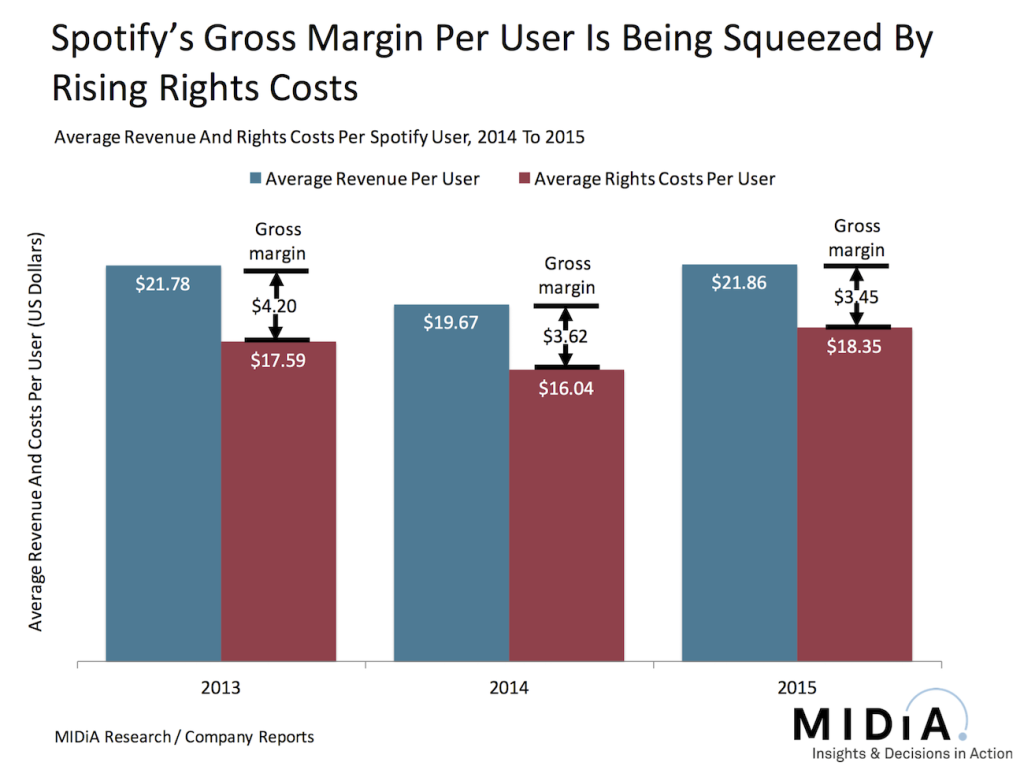 Rights costs are the Spotify’s Achilles Heel. Rights and associated costs accounted for 83% of Spotify’s 2015 revenue, up from 81% in 2014 and this resulted in a dramatic fall in Spotify’s gross margin per user: down from $4.20 in 2013 to $3.45 in 2015. This is particularly challenging for a model with already wafer thin margins. A number of factors underpin this decline:

As Spotify edges towards an IPO it is doing everything within its power to get its house in order. It is investing in video to show Wall Street it is attempting to lessen its dependence on the labels and it is improving is cost ratios virtually everywhere else in its business, other than rights. Between 2013 and 2015, the Average Cost Per User (ACPU) for Research and Development fell from $2.12 to $1.61 and for Marketing it fell from $3.23 to $2.77. But Rights ACPU grew from $17.59 to $18.35. In fact, even in terms of costs as a % of revenues, every single expense Spotify reported fell except Rights (and Depreciation and Amortization which increased slightly). It is rising rights costs that are keeping Spotify from commercial sustainability. 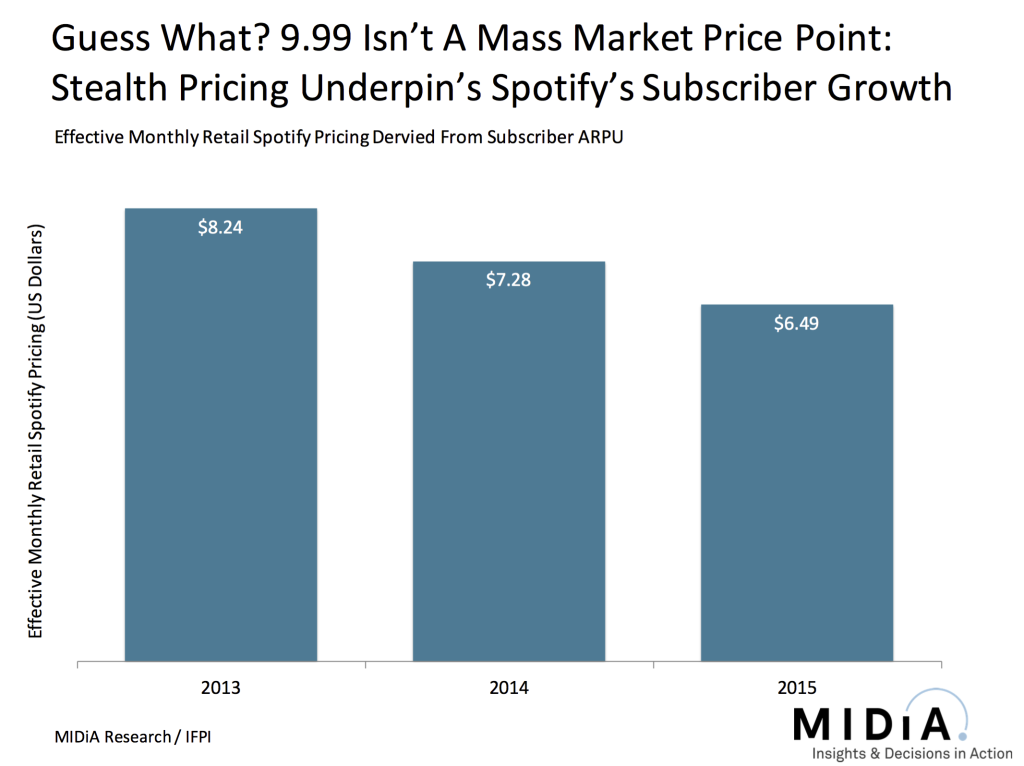 There is another really important part of Spotify’s growth story: subscriber ARPU has fallen from $79.09 in 2013 to $62.30 in 2015. This is a result of multiple efforts to drive growth, including the price promos, telco bundles and student discounts. All of which are viable tactics but the fact they are necessary to drive Spotify’s growth underscore a point I have been making for years: 9.99 is not a mass market price point, and Spotify’s subscribers agree: transforming the ARPU into an effective monthly retail price, Spotify’s average price point is now just $6.49, down from $8.24. It is about time that the music industry stopped pretending that this isn’t the reality of the market and instead starts pursuing proper pricing innovation rather than by stealth via discounting, which only serves to confuse consumers about long term value.

The music industry is in a transition phase. In such periods, the old and new worlds co-exist and collide. There are statistics that both sides of any argument can hold up in their defence, in fact they can often hold up the very same numbers to support opposite perspectives. Similarly, the comparisons you chose to benchmark with, can paint entirely different pictures. Such is the nature of transitions of human and business behaviour. For example, 83% of Spotify’s gross revenue going to rights is clearly too high and unsustainable, yet $0.00098 per song going to artists is clearly too low and unsustainable. Something needs to give, for both ends of the value chain.

Maybe if/when Spotify gets to 50 million subscribers it will feel it has enough clout to compel rights holders to rethink licensing economics. Perhaps it will take Spotify getting to a 100 million to make that happen. Perhaps it will never happen. But if it doesn’t, the economics of streaming will remain so broken that only companies with ulterior business objectives will remain viable players, enter stage left streaming’s Triple A: Apple, Amazon and Alphabet (Google). The labels need to ask themselves whether that is the streaming future they want…

Philipp Zeckai
18 Feb 2017
Hey Mark, i really enjoy your insights and you posts have been quiet helpful for my Masterthesis about Spotify and the musicstreaming industry. But i think you made some mistakes with the Exchange Rate here. For example you calculate $18,35 rights Costs in 2015 but i double checked my calculations and it is 18,35 €. This changes a lot of your calculation with margins etc. (could be that your newer posts corrected the mistake though) Just wanted to give you and other readers a heads up ;) Again, your analysis have really been helping me and i am looking forward for other posts ;) Greetings from Germany, Philipp
zishan mohammad
25 May 2016
The pricing change could also be due by different pricing applies in multiple regions/countries, the bundles (ie the new Family bundles, 5 users for 15 euros). They must scale acquire more users), increase conversion rate to paid subs. 2 ways to scale, organic or external, Soundcloud maybe a good fit because it will compliment their product, diversify their audience and increase buying power toward content rights holders.
christophe Soulard
25 May 2016
hello Mark very interesting as usual... the value of repertoire is still the greatest problem to solve for pureplayers like Spotify. But even more interesting is the fact that the average price point has dramatically fallen due to promotional campaigns in order to sustain growth; I believe that the proper pricing for subscribers which matches with a 6.49 price point should be around 7.99 €/£/$, right? this is the price point that Apple was willing to apply before the launch of Apple Music... and Apple faced a strong opposiiton from major companies, according to various sources. I believe this is the actual market price in order to increase dramatically the subscriber's basis and developp a sustainable mass market of premium streaming
No thanks