Tale of the Tape: UFC or Bundle Driving ESPN+ Adoption? 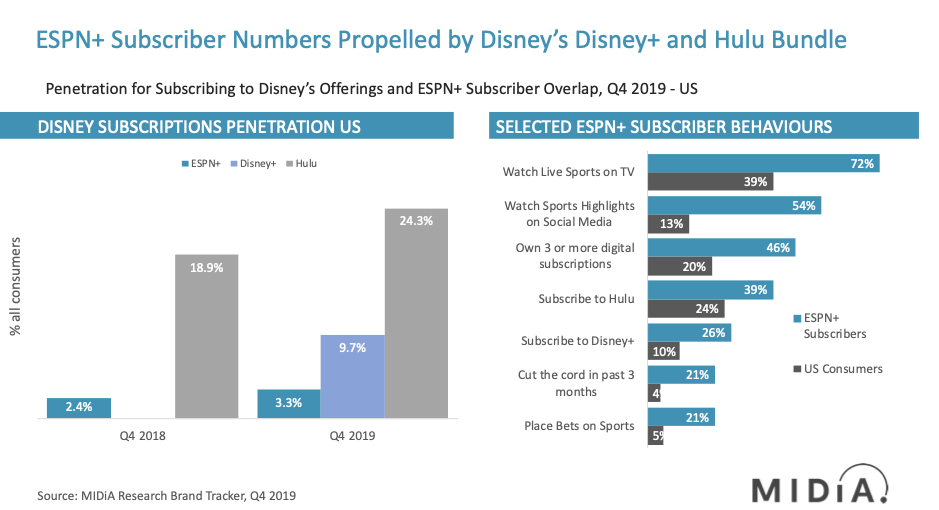 Walt Disney’s pureplay sports streaming service ESPN+, which launched back in April 2018, has surpassed 7.6 million paid subscribers, Disney’s chief executive Bog Iger reported during last week’s earnings call. Doubling its 3.5 million subscriber base (revealed in November) in just one quarter is impressive considering it took two quarters since inception to surpass one million subscribers, but what is driving this increase?

Disney’s highly-touted bundle, which officially launched alongside Disney+ in November for $12.99 per month, is believed to have been the catalyst for this increased rate of adoption. Incorporating Disney+, Hulu and ESPN+ into one subscription provides a digital pay-TV solution at a fraction of the cost of traditional pay-TV, and takes dead aim at Netflix by bringing live news and live sports to the streaming table. Currently, the majority of premium domestic sporting rights are still held by pay-TV operators. However, with ESPN being the only pay-TV operator to hold relationships with all four major rights holders (NFL, NBA, MLB, NHL) domestically, ESPN+ is in a prime position to leverage these established relationships and acquire a larger share of these rights come 2021, when the ‘D-Day’ for sporting rights begins.

The UFC attempted to replicate the model the NBA employed when Yao Ming was drafted by the Houston Rockets back in 2002 by seeking to unearth its first Asian World Champion, succeeding when Weili Zheng destroyed Jessica Andrade within one minute last August. Disney, on the other hand, will be hoping to maximise the hysteria that the outspoken and popular Conor McGregor brings to one of its current core assets. ESPN became the exclusive home of the UFC in May 2018 as part of a five-year $1.5 billion deal, bidding $184 million per year more than previous owner Fox. The gambit, which began to pay off in just five months with ESPN+ surpassing one million subscribers following its first of 20 exclusively streamed UFC events, now looks to be a smart strategic play.

Conor McGregor, who reportedly made £60,000 ($77,000) per second during his 40-second demolition of Donald ‘Cowboy’ Cerrone following a 15-month hiatus from the octagon, also drove record-breaking consumption for ESPN+. During the earnings call, it was disclosed that the Irishman’s participation at UFC 246 generated over one million pay-per-view streams, and contributed to ESPN+ adding one million subscribers from the 6.6 million at year-end. 500,000 subscribers signed up for that fight alone.

Tale of the Tape: UFC versus Bundle

As in sports, brands and operators cannot afford to have stars bigger than the brand. With Netflix’s most-binged shows being pulled off of its platform back to their respective parent companies’ ecosystems (e.g. Marvel, the US Office and Friends), Netflix is vulnerable to losing its appeal. Similarly, ESPN+ cannot afford to become overly dependent on individual rights, which is why the bundle proposition looks to be so appealing. As we are at the peak of the attention economy, competition for audience attention intensifies, and consumers are being forced to specialise with which services they allocate their finite attention. Coupled with streaming services fragmenting the market further, allocating finite resources has become a growing concern. Serving multiple use cases for consumers’ entertainment needs is the primary objective to justifying consumers allocating subscription dollars in the post-peak era, something Disney looks to achieve with this bundle. Fortunately, ESPN+ subscribers significantly over-index for Disney’s Hulu and Disney+ offerings, being approximately 15 percentage points more likely to subscribe than the average US consumer (source: MIDiA Research). ESPN+ subscribers are also five times more likely to have cut the cord in the past three months and transition to streaming, meaning they are more likely to look to streaming alternatives to satisfy their entertainment consumption.

Looking at content genre consumption, ESPN+ weekly active users (WAUs) over-report for watching action (72%), comedy (72%) and movies (69%) compared to the US average (55%, 58% and 57% respectively). This would suggest Disney’s bundle is a smart strategic deployment. With a competitive $12.99 monthly price point, coupled with investment in premium and exclusive content, don’t expect the adoption to slow anytime soon. With only 21% of ESPN+ WAUs reported to watch MMA content, it appears the bundle hits heavier than the UFC when it comes to driving adoption.

by Tatiana Cirisano
6 Dec 2022
No thanks