Being a music artist is no easy feat these days. Labels are struggling to cut through the clutter of content proliferation, pushing artists to shorten songs, forgo the album, and prioritise playlist placements over fan-centric marketing. Indeed, as MIDiA has discussed, music – or rather, the business of it – has developed an attention dependency, with the struggle between culture and consumption largely favouring the latter, as far as the labels are concerned.

Yet any funeral held for the culture of music would be interrupted by wave-swept chanting drifting on the wind from the far-off TikTok content miasma, hinting at a new era of creativity. MIDiA has also recently discussed the changing culture of consumption, but has perhaps yet to discuss a trend heretofore disguised as purely “fandom”: a growing culture of creation. 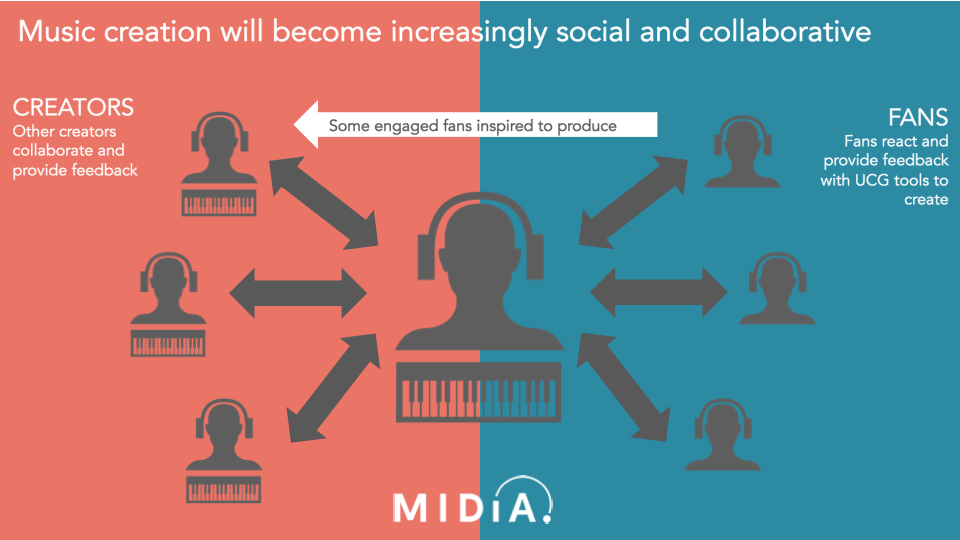 Lil Nas X’s ‘Old Town Road’ was made for TikTok, going viral in 2019 with fan-made dance videos permeating beyond the app and emerging everywhere from memes to club floors. Many a music marketer has wondered at the cause of this phenomenon – and the formula to its replicability – but much as anything on the internet, it seems a combination of the right thing at the right time and a healthy dose of serendipity. The fickle rule of mass attention holds little sacred (save, perhaps, Shrek, Doge, and Bernie Sanders). And, indeed, this fickle nature has now turned to something decidedly not designed for the internet era at all: the sea shanty. Sea-related work songs typically associated with merchant vessels of the 19th century. They tell of whaling, distant wives, being lost, working hard, and drinking, and are now being sung by young TikTokers in their bedrooms during lockdown.

The trend – much as it can broadly be traced – began with one 26 year old Scottish postman on TikTok with a rendition of The Wellerman. Since December he has racked up millions of views of his videos of old shanties, but The Wellerman seemed to hit a nerve and went viral (and the lad himself has now signed a label deal with Polydor).

Unlike Old Town Road, however, this journey was not one of fans appreciating the work; it was of them joining in on it. One TikToker took the video and recorded himself next to it singing a different vocal part. Another added to this, and another – even a fiddle has become involved. ‘Sea Shanty TikTok’ became its own ecosystem. From here, the remixes emerged on YouTube. Trend commentary started up on Twitter, declaring 2021 the “Year of the Sea Shanty”, and the screencap memes spread from there to Facebook and Instagram. A search for “Sea Shanty” on Spotify now yields hundreds of fan-made playlists.

Even fans of the current sea shanty craze have to wonder – why? Gaming, perhaps, had a hand in it, with the playlists on games like the classic Runescape, Assassins Creed and modern hit The Witcher featuring shanty-esque tunes over the last decade-plus. Many scripted dramas, from Black Sails to Outlander, also feature the hearty beats and simplistic momentum on their soundtracks. However, the consensus as to why now, specifically, is that ultimately the songs are simplistic, meant to unify people by singing together, and tell of unpredictable times, cramped spaces, and temporal ambiguity. In 2021, with an end to the virus promised by a vaccine but with a delivery timeline vague at best, one can see the appeal.

The rise of the TikTok Sea Shanty highlights a trend of content consumption that has yet to be adequately addressed: in the saturated attention economy, lean-back content is all interchangeable in consumption. It is creation by fans in response that stands out. Covers. Dances. Memes. Tributes.

The sea shanty phenomenon demonstrates a new driver of success in the digital era for content which not only pleases but inspires others to create for their own interest. The Wellerman could have been viral on its own, but it was the continued additions; the encouragement of manipulation, adaptation, and sharing, that has truly swept the internet.  How this plays out from a monetisation perspective remains unclear. Typically, when talking about monetising fandom, the inference is for selling directly related content such as purchasing skins in a video game, for example, or some form of digital scrapbooking. Creative virality currently can only be monetised by the distribution platforms providing the engagement experience (i.e. ads via TikTok, ads/subscriptions via Spotify). The manifold sea shanty creators currently remain on the outside of this well-established monetisation funnel.

However what is clear is that a culture of digital music consumption is now additionally evolving into a culture of creation. The line of ownership and tribute is blurring ever more quickly, and is resulting in unplanned and in some cases extreme success.

The original creator being signed to a label, while great for him, is not even the point. He is not captain of the sea shanties; it is unlikely his songs will top the charts, or really sell out huge venues in years to come (although the yodelling Walmart boy perhaps speaks otherwise, which may be what Polydor is after).  There are no true rulers in the digital world, only communities – perhaps appropriate in and of itself to the sea shanty vibe.

In 2021, everyone can be a creator. Collaborating, not consuming, is now also a mark of streaming success.  The next step is to look at the inevitable – the idea of transforming this sort of phenomenon into a viable income stream for the tens of thousands of micro-creators fuelling this content collaboration revolution. True disruption for the creator income stream edges closer as creative behaviour moves more mainstream, and there has never been a more pressing time to re-examine.

by Hanna Kahlert
5 Jan 2021
As we begin 2021 with a vaccine on the near horizon, live venue businesses are holding on with whitening knuckles through the intermediate stricter lockdowns. However, the world has changed much in the...

by Alistair Taylor
14 Jan 2021
For decades, rights holders have prioritised (and relied upon) exponentially increasing broadcast revenues as a mechanism for sustainability and growth, a legacy approach that is in dire need of a review...
No thanks