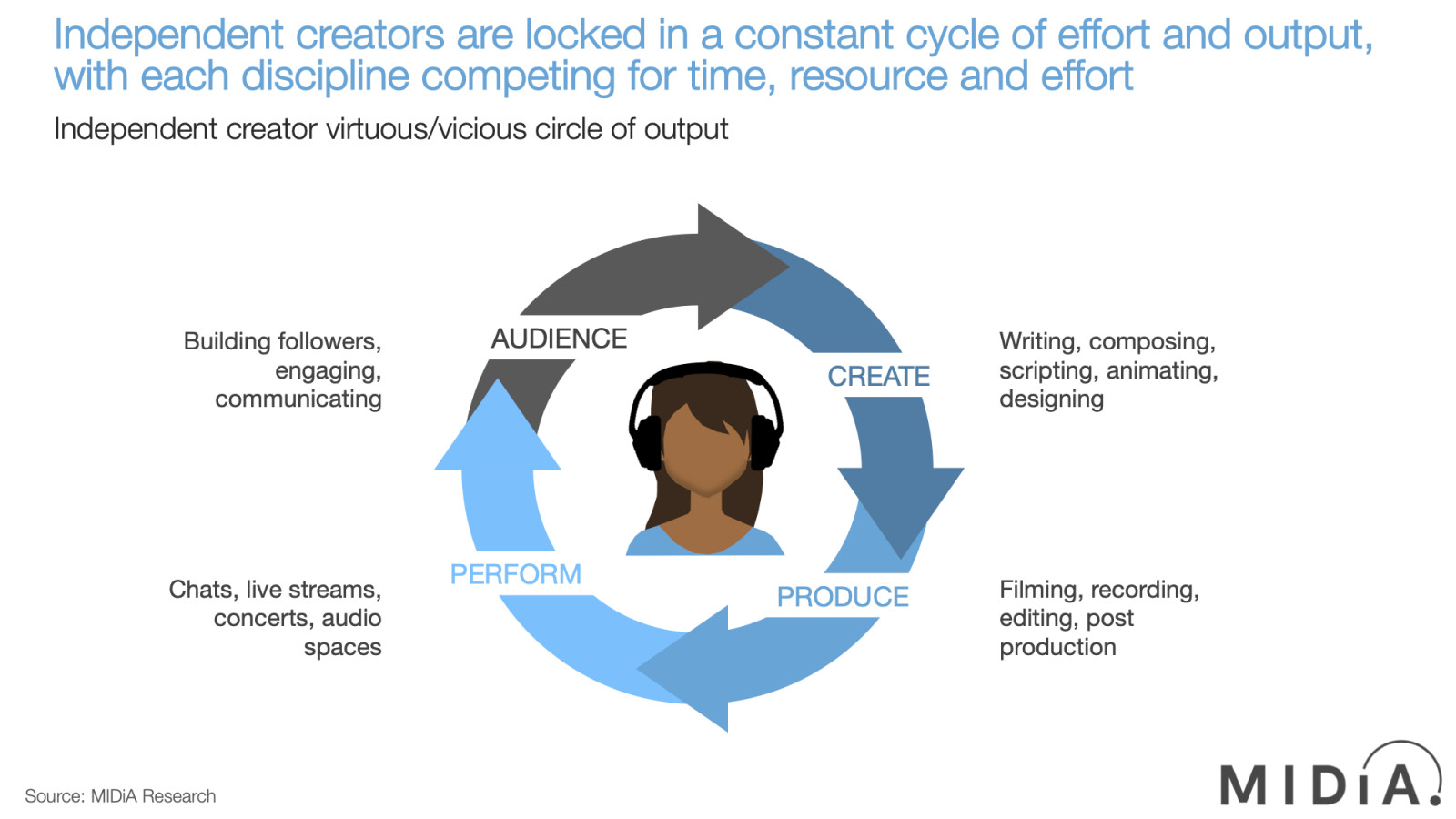 First and foremost, the creator economy is a business model for the platforms and adjacent services, one that is built upon harnessing the hopes, dreams, and aspirations of large-scale creator audiences. While each of those creators individually craves success – however they might measure it – the platforms do not need the creators to find success for their respective business models to work. This is because, they monetise creators by harnessing aspiration at scale. If there are enough creators – and the pool is growing fast – a multitude of small-scale audiences are enough to drive the platforms’ strategic objectives of driving audience engagement, which, in turn, drives revenue. What complicates matters further is the fact that creators are developing platform dependence – merely renting space on the platforms they depend upon, rarely with tenancy rights and often slave to the algorithm. It might be the creator economy, but creators fuel it rather than drive it.

Platforms are using audience as the new form of distribution

What has enabled this conflicted set of priorities to become established is the rise of platforms that use audience as the new form of distribution. Whereas traditional entertainment services, like Netflix and Spotify, license and create content to distribute to audiences, audience platforms, like TikTok and Twitch, pull their content from the audiences themselves. Even though most users consume rather than create, the creators come from their ranks. The old paradigm of license / create-distribute-audience has been replaced by audience-create-audience. If the traditional entertainment business depends on cannon balls, the creator economy trades in bullets.

Audiences are becoming creators, too, with 18% doing some form of content creation and 10% using creation tools in social platforms. Only 33% of consumers only ever purely consume content. Audiences went from lean back in the analogue era, lean in during the streaming era, and now lean through in the creator era. A growing body of creators is learning to harness this growing demand for creation, as evidenced by music creators, like Pink Panthress, Sadie Jean and Russ, canvassing input from their fanbases on TikTok. 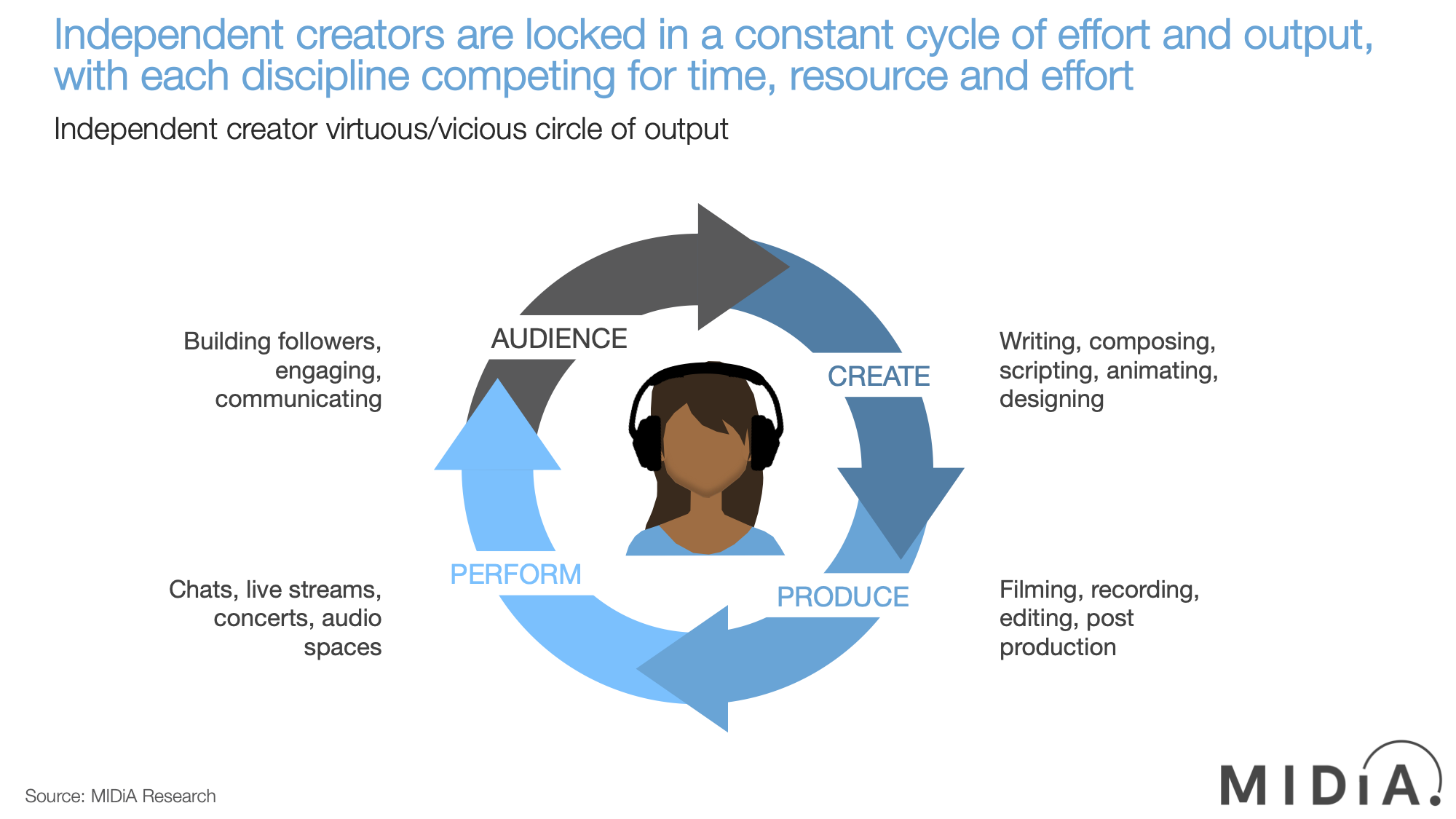 The current surge in the creator economy is opening more doors for more creators than ever before while also bringing audiences ever closer to creation, too. But, as the number of creators grows, fandom and consumption fragment. The longer the tail, the harder it is for creators to cut through, find audiences, and build careers. Creators find themselves locked in a perpetual cycle of create / produce / perform / engage, with their host platforms demanding ever higher levels of frequency and volume of output.

With creators’ constant fear that jumping out of the creator hamster wheel will see them disappear from the algorithm, there is a growing awareness that owning their audiences and having direct communication with them has never been more important. Yet today’s creator economy is not built this way. The rise of companies like Pico, Disciple Media and India’s ChargeBee point to the growing recognition of the ‘off-platform’ opportunity. But the majority of creators have the majority of their audiences on platforms where they are slave to the algorithm.

Owning audience is just one item on a long list of structural challenges (e.g., remuneration, discovery) that the creator economy must address if it is to transition from its current phase of undoubted opportunity, into something that can genuinely reshape and redefine the future of entertainment itself. There is both a duty of care and a window of opportunity that creator-economy companies must seize with both hands, but the second cannot be achieved without the first. That is why it is time to re-create the creator economy.

If you are not yet a MIDiA client and would like to find out how to access this report then email stephen@midiaresearch.com

by Annie Langston
18 Aug 2022
Podcast discoverability continues to be a core challenge for audience platforms, audio creators, and listeners. With the rise of the creator economy, more voices are entering the space, which increases...

by Tim Mulligan
11 Aug 2022
The last two weeks have witnessed two contrasting approaches toward the increasingly fragmented world of show fandom. First of all, it was revealed that Netflix has taken legal action against Abigail Barlow...
No thanks