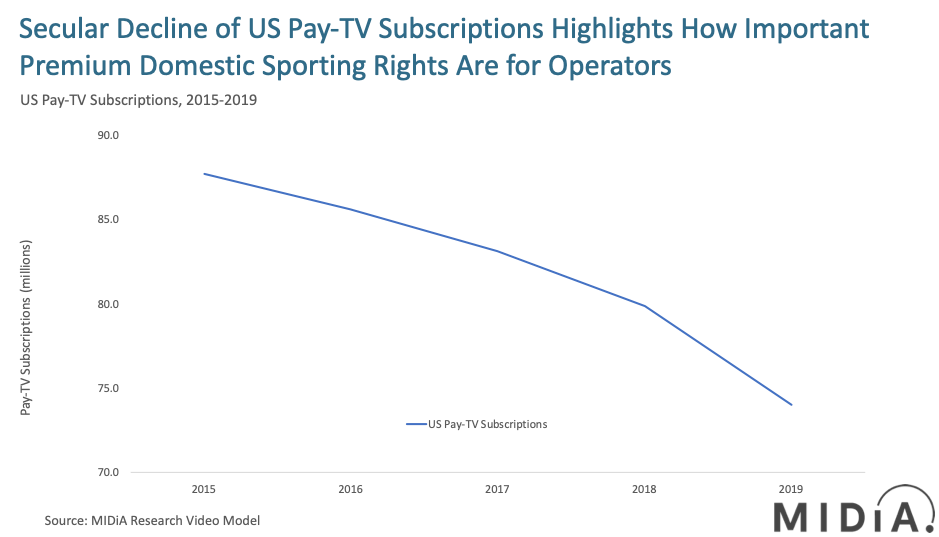 The NFL’s recently released viewing figures provided to CNBC highlighted a 5% increase in viewership as TV audiences grew on average to 16.5 million, up from 15.8 million in 2018. Not only this, but throughout the season the NFL finished with 41 out of the top 50 broadcasts (of which only five were not sports). While this growth is being presented as a major win for the NFL, it conceals an increasingly alarming concern for traditional pay-TV’s value proposition.

Premium sporting rights are the last asset maintaining pay-TV’s relevance in the peak attention era. Just how traditional pay-TV operators cope when premium domestic rights are fragmented further, due to the emergence of streaming live sports as a viable alternative, remains to be seen.

52% of American football viewers hold pay-TV subscriptions, compared to a US consumer average of 45% – which is no surprise given where the broadcast rights currently exist (source: MIDiA Research). This could all change in 2021, when the ‘D-day’ for sporting rights begins as premium domestic rights deals are renewed and rights holders decide which services to partner with. With 59% of linear TV viewers and 58% of pay-TV subscribers watching American football, the need for traditional pay-TV operators to retain these rights has intensified.

The legacy model of revenue over reach will of course again be contemplated, considering just how badly traditional pay-TV companies depend on these tier-one rights domestically. The NFL’s stated stance on reach from September 2018 will come under the microscope when it allocates its most valuable rights packages to distribution partners. It has become a pioneer of digital experimentation with its forays into e-sports as well as music and social media platforms, which will provide invaluable due diligence as to how viable these digital offerings would serve as a primary distribution partner. However, currently only Thursday Night Football (TNF) rights have been awarded to digital-first services, first with Twitter, then Amazon Prime Video and most recently Twitch. Under its current live broadcast rights cycle (including digital and mobile), the NFL generates $7.9 billion per year (source: MIDiA Research), of which the pay-TV operators (CBS, ESPN, NBC, Fox and DirecTV) contribute 93% of its total rights revenue domestically. With these rights set to expire in 2022, if the pay-TV operators decide not to play ball and match the NFL’s lofty valuations, the league could be forced to meaningfully engage with the streaming insurgents, which offer digital audiences that are currently underserved by linear partners.

For the NFL, however, given the secular decline of pay-TV subscriptions and continued decline of TV ratings, this growth in viewership is significant. Growing engagement in a highly-fragmented landscape, when competition for audience attention is at an all-time high, illustrates the draw of the most valuable commodity in the world of sports. Pay-TV simply cannot afford to lose its hold on its last remaining prized asset. With the sustained haemorrhaging of pay-TV subscriptions, continuing to seek revenue as its primary bidding prerequisite will leave the NFL with a dwindling addressable audience. The NFL should stay true to its word and adopt a reach over revenue model, a strategy it proclaimed in 2018, in order to future-proof its fanbase and long-term sustainability through digital expansion.

by Alistair Taylor
2 Apr 2020
The NFL’s commissioner Roger Goodell announced to all 32 teams in a memo on March 26th that the NFL draft will go ahead as scheduled from the 23 rd to 25 th of April, despite growing pressures resulting...
No thanks