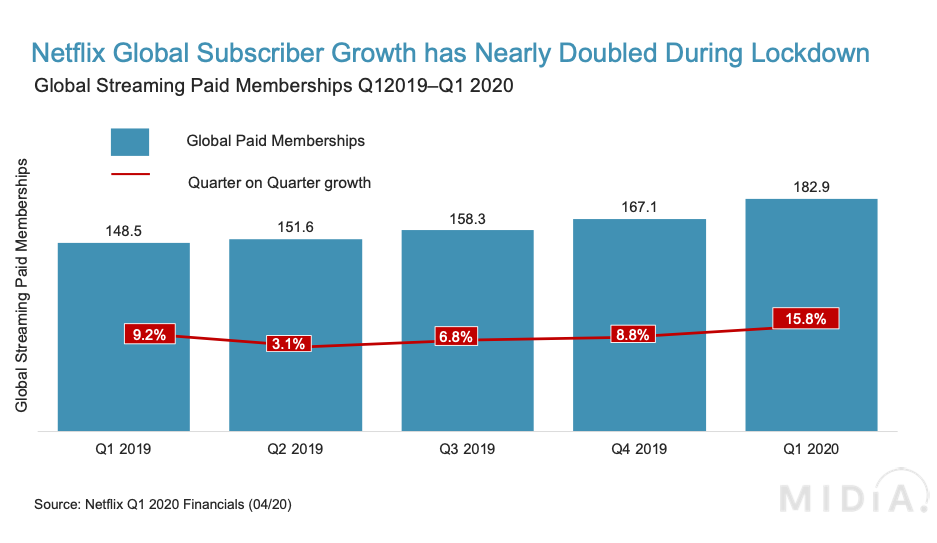 As the world continues to adjust to the new normal of lockdown, work and entertainment now revolves around the home. Over the past month a combination of consumer survey data, ratings announcements and press releases from streamers have provided us with a glimpse into the real impact of COVID-19 lockdown measures on streaming.

Two weeks ago MIDiA Research surveyed consumers on the impact of COVID-19 on their entertainment consumption and found that streaming TV shows via subscription services such as Netflix was up by nearly a third in markets such as the UK and almost a quarter in the US. Shortly afterwards Disney revealed that it had passed the 50 million subscriber mark.

Yesterday for the first time in Netflix’s Q1 2020 earnings report the financial data is now tallying with the consumption indicators currently being logged.

As Netflix’s current business model is built around enticing consumers to subscribe to the service, yesterday’s big win was the near doubling in the growth rate of global paid streaming subscribers on a quarterly basis. On a year-on-year basis, net additions are up 27.6%. This is welcome news for Netflix as it prepares itself for the increasing video streaming competition.

In addition to new direct-to-consumer (d2c) arrivals Disney+ and Apple TV+, Warner Media announced yesterday that HBO Max will now debut on May 27th, while Peacock will fully launch on July 15th. Yesterday’s results show that Netflix has shifted from defence to offence, moving from retention to a resumption increasing subscribers—and just as well considering the $15 billion Netflix has allocated to content expenditure in 2020, and the additional $4.4 billion it added to its debt load in 2019.

As subscribers grow so does the cost of servicing those customers

With the estimated $9 trillion committed thus far by national governments towards mitigating the financial impacts of the current COVID-19 pandemic, the likelihood of low interest rates continuing is steadily diminishing. As such Netflix will have to find ways to make its content budgets go further to retain its existing members and to attract new subscribers. The lockdown success of Tiger King shows how this can be achieved for a mainstream global service such as Netflix.

Investing in more cost-effective programme formats and genres is leading to the rise of pandemic programming, where alongside increasing factual and reality output (i.e. Tiger King), episodic release schedules (i.e. the Mandalorian) are allowing streaming services to tap into the linear world go-to-market strategies of making content ROI last for a longer period of time.

With so much uncertainty about the current pandemic crisis, one outcome is crystal clear for the streaming video landscape: more subscribers means more content demand. When production freezes are lifted post-lockdown and the content arms race resumes in earnest, savvier D2C operators will be thinking closely about smart programming engagement optimisation. After all ultimately the buck stops with…well the buck.

by Mark Mulligan
29 Apr 2020
Spotify’s first quarter earnings were a mixed bag, with a largely positive picture for Q1 but some warning signs for the remainder of the year: Subscribers:  Spotify’s Q1 earnings may not have...

by Tim Mulligan
29 Apr 2020
As a quarter of the world goes into a second month of lockdown some interesting trends are starting to emerge. First of all was the spike in TV and video consumption with linear viewing challenging the...