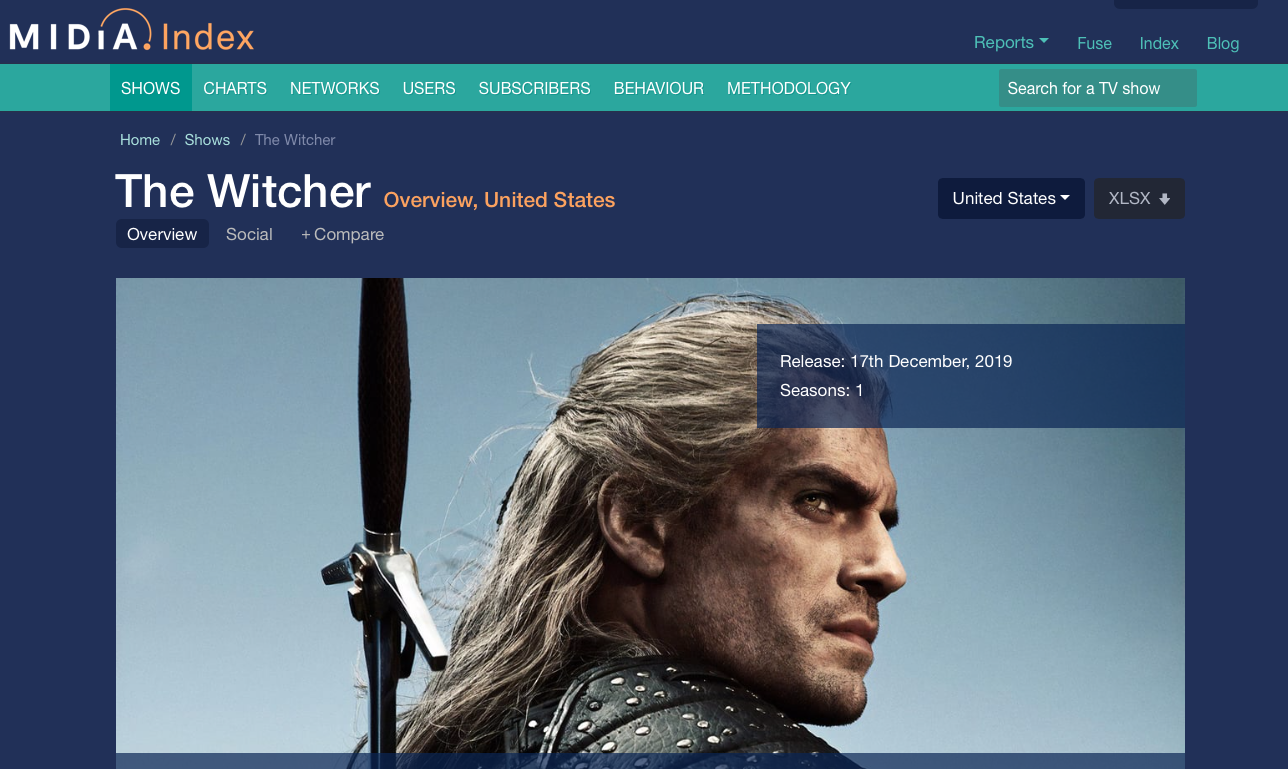 Netflix, the current subscription video on demand (SVOD) global leader, has topped Wikipedia searches for the second week of 2020 with its new fantasy scripted drama original, The Witcher. The show is based upon a story universe created by Polish author Andrzej Sapkowski, which originated in novel form and has since morphed into – among other adaptations – a hugely popular game franchise with 40 million unit sales to date. The central character is a supernaturally gifted monster hunter with a remit to battle various denizens of a fictional, unnamed world divided into elaborately political kingdoms. The Netflix rendering of the story universe inclines heavily towards the game franchise, with the aesthetic of the show reflecting gimmicks in the game – from casting, camerawork and editorial style choices to scenes set specifically in side-quest settings ardent players will instantly recognise.

MIDiA Index tracks the world’s leading TV shows, and one of its key demand indicator metrics is tracking the amount of views the Wikipedia pages of shows receive – as an active Wikipedia search for a show demonstrates active intent to find out more about a prospective viewing opportunity. It also provides studios and networks with crucial early indications of the pre-launch demand interest in a show (both Apple’s See and Disney’s The Mandalorian topped the Wikipedia page viewing charts prior to Apple TV+ launching on November 1st and Disney+ launching on November 12th 2019).

Niche is the new mainstream

The Witcher is in many ways a land grab by Netflix for a share of HBO’s Game of Thrones (GoT) fantasy/horror audience now left unserved until HBO Max’s GoT prequel, House of the Dragon, becomes available following its production greenlighting last November. However, it does not need to replicate the mainstream crossover appeal of GoT in order to justify its return on investment for Netflix. That the creators of the of the show have stylistically aligned it so closely to the already-popular game enables Netflix to tap in the 40 million strong gamer fanbase for the franchise. MIDiA Research estimates that converting 5% of these fans alone into a year-long Netflix subscription, allowing for churn, will cover the production cost of season one of the series.

The increasingly asynchronous nature of content consumption in the post-linear world of TV shows has created the commercial demand and ensured cultural freedom for show commissioners to focus on strong niche appeal rather than the traditional four market quadrant (targeting the under 25/ over 25/ male/female audiences) prime time big-budget commissions of the analogue era. The success of The Witcher is down to the confidence streaming services now have to invest big budgets into niche shows which can succeed due to the pooled global niche which can be targeted for a particular new release. One of Netflix’s early commissioning world-view disruptions was to recognise that their on-demand distribution model enabled a plethora of prime time viewing opportunities, and so the four-quadrant straitjacket no longer needed to apply when choosing which commissions to green-light. The early win following this strategy for the SVOD leader was 2013’s House of Cards remake, which put Netflix on the map as a destination for compelling, nuanced drama.

House of Cards worked in the same way that The Witcher will because a big budget aligned with niche storytelling results in strongly original content – which stands out from the tired, safe, four-quadrant programming predominating on ad-dependent linear TV (one-hour slots subdivided by multiple narrative-disrupting ad breaks, and storylines which avoid antagonising advertising partners). While The Witcher will most definitely not appeal to the majority of consumers, it will delight and super serve fans of its specific genre niche and is poised to mine a rich vein of future content through tapping into a unique story universe in a similar way to the Westeros seam worked to the hilt by HBO over the nine years of GoT’s production life.