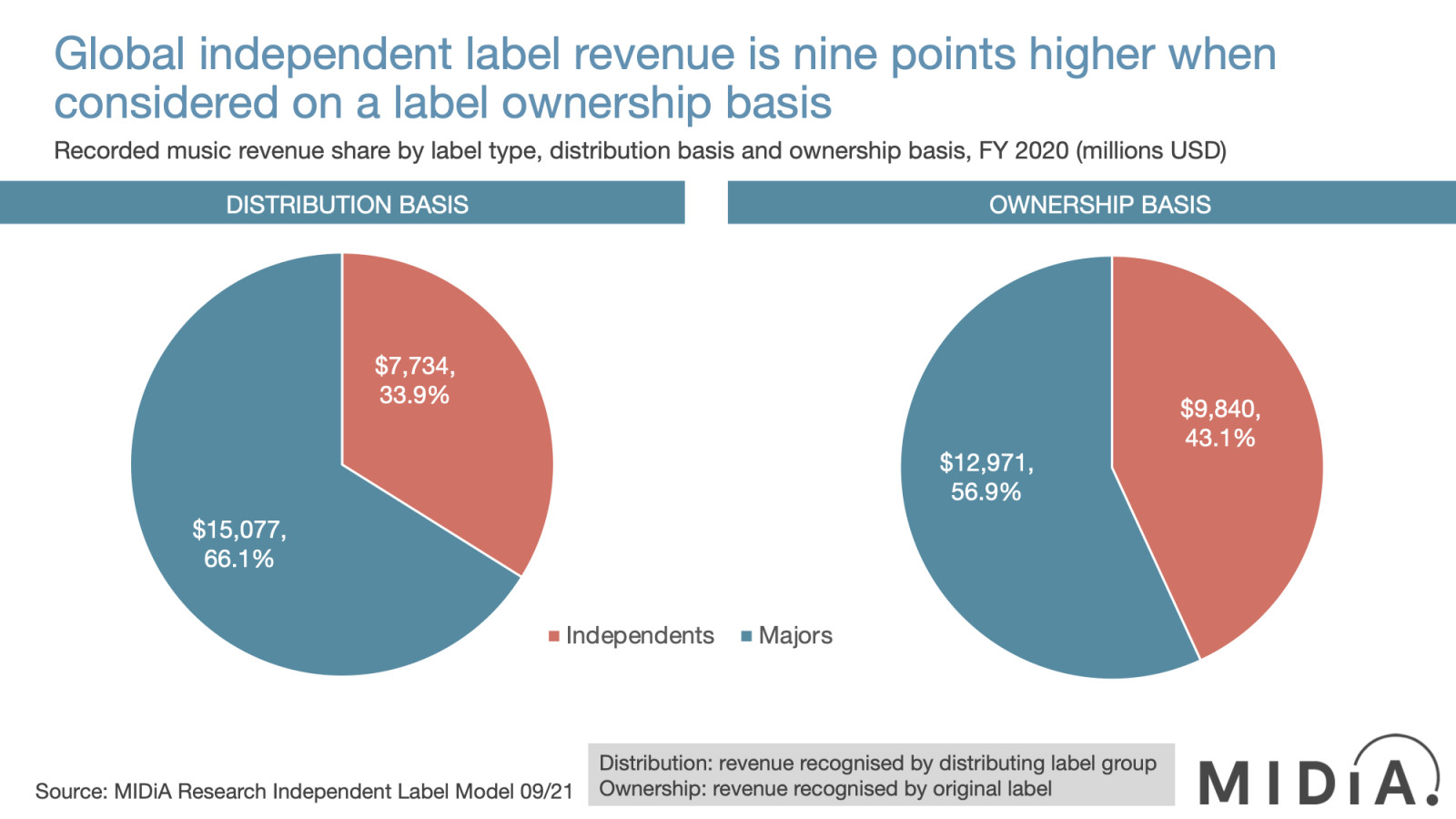 It has been a long time since the music industry has been in such good shape. So long, in fact, that there are not too many executives left who worked through the pre-crash days. 2021 was the year in which the major label groups capitalised on the momentum, with Universal and Warner going public, and Sony going on a spending spree. This was off the back of a strong 2020, in which the majors collectively generated $15.1 billion, giving them a market share of 66.1%. So far, so normal, but all is not quite as it seems. This market share may be how the world sees the majors’ success, but it significantly underplays the revenue contribution of independents. MIDiA decided to fix that.

At the start of this year MIDiA fielded a large-scale, global survey of independent labels, collecting billions of dollars’ worth of revenue figures. We think that it is the most comprehensive survey of the independent sector done yet. In the survey, we asked labels about a range of factors, which enabled us to paint a complete picture of the state of the independent sector in today’s music business. Crucially, we collected detailed data on distributors, and this is where the under reporting of independents comes into play.

The undoubted benefit of the streaming era is that it presents artists and labels of all sizes with the ability to reach global audiences. But most independent record labels do not have sufficient scale nor resources to license and distribute directly to streaming services, and thus turn to the ever-expanding marketplace of digital distributors. Never shy to an opportunity, the major record labels have established themselves as key players in this space, distributing independent labels either directly or via their distribution arms. The value that they deliver to independents is clear, but the revenue goes via the majors’ accounts, and so major label revenues are boosted by independent revenue, thus inflating the market share of the majors. With the data we tracked in our independent label survey, we were able to unpack this ‘embedded’ distributed independent label revenue from the majors’ total to arrive at the ‘actual’ market share of independents, based on who holds the copyright, not simply on who distributes it. 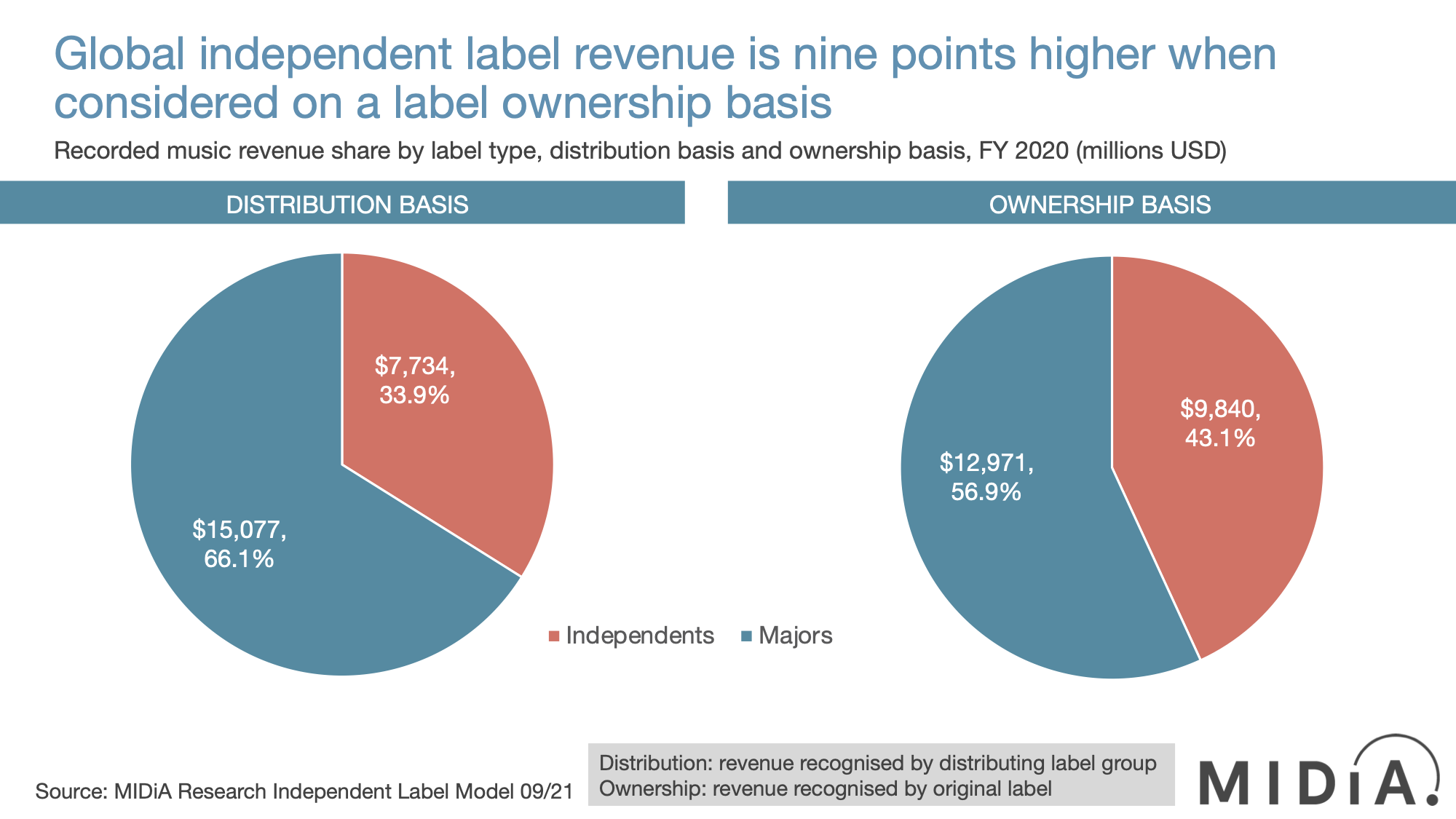 Measuring market share on this ‘ownership’ basis, independent market share (which includes artists direct) goes from 33.9% (the ‘distribution’ basis) to 43.1%, i.e., an additional 9.2% of share. Or, put another way, an addition of $2.1 billion. The independent share was up from 41.3% in 2018, and in 2020, independent revenue (on an ‘ownership’ basis) grew by 12% compared to a total recorded music market growth of 12%. All of which means that independents (labels and artists) are a) bigger than standard industry measures suggest, and b) growing faster than the total market and are thus increasing market share. Which makes the majors’ strategy even smarter. If they were not so active distributors of independents, they would simply be ceding all of the revenue, instead of, as they are, capturing some it and being able to report the market share as their own.

These findings and much more (including regional market data and data on label operations (e.g., A+R, marketing, catalogue size, years in operation)), are available to MIDiA clients in this full report.

All independent labels that took part in the survey have already received a copy of the report. If you want a copy of next year’s edition, be sure to take part in the next survey when we announce it!

by Mark Mulligan
12 Nov 2021
At MIDiA, we spend a lot of time exploring the fan economy and how new forms of fandom are redefining media businesses. The most significant underlying dynamic is the fragmentation of fandom: the dynamic...

by Karol Severin
25 Nov 2021
Epic Games announced it is acquiring Harmonix, the maker of Rock Band. While this makes sense for the Fortnite maker and its entertainment metaverse, it has the risk of diluting the potential music expertise...

Edwin
22 Apr 2022
Hello, really nice article! Is there any absolute number how many independent artists/musicians there are in the US?
Robert Parson
14 Mar 2022
Thanks for the information
No thanks