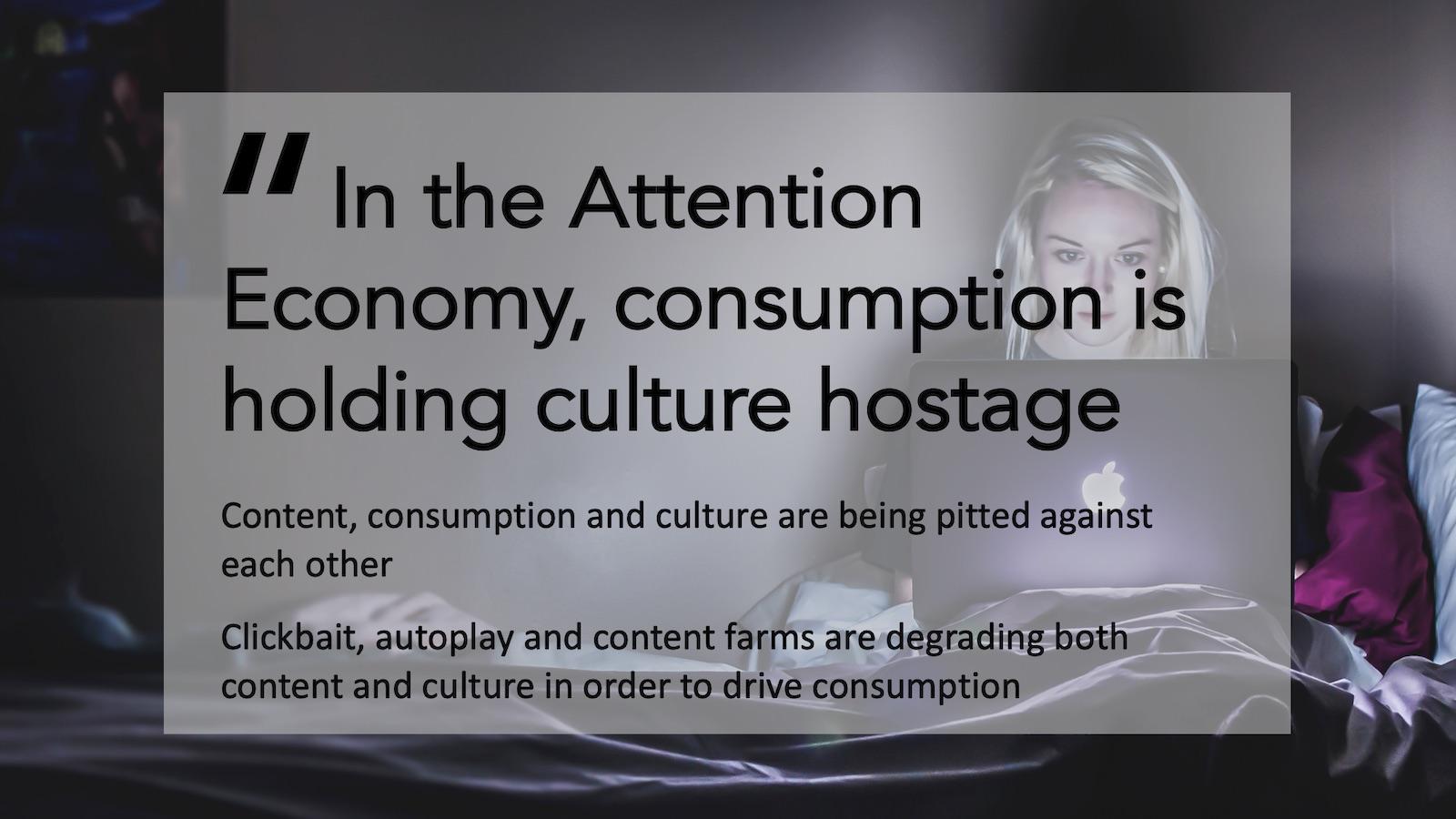 The attention economy defines and shapes today’s digital world. However, we have long since reached peak in the attention economy with all available free time now addressed. What this means is that previously, when digital entertainment propositions grew, they were often using up users’ free time. Now though, every minute gained is at someone else’s expense. The battle for attention is now both fierce and intense. What is more, it will get worse when much of the population finally returns to commuting and going out, as 2020 was defined by entertainment filling the extra 15% of free time people found in their weekly lives. But there is an ever bigger dynamic at play, one which gets to the very heart of entertainment: the attention economy is becoming a malign force for culture. Consumption is holding culture hostage.

The increasingly fierce competition for consumers’ attention is becoming corrosive, with clickbait, autoplay and content farms degrading both content and culture. What matters is acquiring audience and their time, the type of content and tactics that captures them is secondary. It is not just bottom feeder content farms that play this game, instead the wider digital entertainment landscape has allowed itself to become infected by their strategic worldview.

Do not for a minute think this is a media-only problem. The corrosive impact of the attention economy can be seen right across digital entertainment, from hastily churned out scripted dramas, through to music. Artists and labels are locked in a race to increase the volume and velocity of music they put out, spurred on by Spotify’s Daniel Ek clarion call to up the ante even further. In this volume and velocity game, algorithm-friendly A&R and playlist hits win out. Clickbait music comes out on top. And because music attention spans are shortening, no sooner has the listener’s attention been grabbed, then it is lost again due to the next new track. In the attention economy’s volume and velocity game, the streaming platform is a hungry beast that is perpetually hungry. Each new song is just another bit of calorific input to sate its appetite.

In this world, ‘streamability’ trumps musicality, but it is not just culture that suffers. Cutting through the clutter of 50,000 new songs every day also delivers diminishing returns for marketing spend. Labels have to spend more to get weaker results.

Music subscriptions accentuate the worst parts of the attention economy

Perhaps most importantly of all though, music subscriptions are the worst possible ecosystem in which to monetise the attention economy. In online media, more clicks means more ads, which means more ad revenue. In music subscriptions it is a fight to the death for a slice of a finite royalty pot. A royalty pot that is also impacted by slowing streaming growth and declining ARPU. The music industry has developed an attention dependency in the least healthy environment possible.

This is not one of those market dynamics that will eventually find a natural course correction. Instead, the music industry has to decide it wants to break its attention dependency and start doing things differently. Until then, consumption and content will continue to push culture to the side lines.

It is time to take hold of the wheel

Some years ago, Andrew Llyod Webber said this: “The fine wines of France are not merely content for the glass manufacturing business”. Although those words are of someone from the old world grappling with the new, the underlying premise remains. None of this is to suggest that streaming consumption is not the future. Nor is it to even suggest that all of the changes to the culture of music that streaming has brought about are negative. In fact, it may be that streaming-era music culture is simply what the future of music is going to be. But what is crucial is that artists, labels, songwriters and publishers take an active role in steering the ship to the future rather than simply getting pulled along by the streaming tide.

What measures an artist's success in today's music industry?

by Keith Jopling
23 Dec 2020
It’s that time of year again for lists. Endless top albums and song rankings that can be a bonus for a music artist to be included on. A placement on an influential list (which ones those are is more...

by Tim Mulligan
20 Nov 2020
One of the many knock-on effects of this month’s US Presidential election has been the temporary reprieve granted to social video app TikTok. The app is owned and operated by ByteDance, the Beijing-based...

by Alistair Taylor
12 Nov 2020
WWE’s Q3 2020 results provide a fascinating insight into how a live event-focused entertainment business has successfully navigated a global pandemic. In its financials for the quarter , WWE saw a 19%...

Shomee dot life
18 Jan 2021
Good article. But what do you suggest is the way forward? Music labels are in this situation because they didn't "take hold of the wheel" when digital was just emerging. This goes back to mp3s, and even CDs for that matter. They've never led the charge, never innovated the technology, or tried to add value to the user experience, and it's doubtful they ever will. It's really up to the artists themselves to take control. The tools are there for them to do this. All that's missing is support from one major player who's willing to go out on a limb, as Netflix and Amazon have done for the video market. Either that or we resign ourselves to AI manufactured music spun from the data fed by streaming platforms.
Kevin R
18 Jan 2021
"Kill the creator." seems the techbro biz model. They are happy to have AI do the art - in any form. Understandable but self destructive. I am in midsized USA city - music is dead, that happened before covid. Zero money for young performers. The web destroys all value, but time's arrow goes in one direction.
Neil Cartwright
15 Jan 2021
I get the point you're trying to make, Mark. It feels like lowest common denominator is winning out. But it strikes me it isn't borne out by the music I'm hearing every day. There is incredible music being made by a wide range of different artists. Listen to the 2020 top albums listed by NME or the Guardian. Look at the MOBO nominations. Look at kpop, reggaeton, desi hip hop or Nigerian pop. In all countries, in all genres, the boundaries are being pushed and creativity is on a seemingly neverending upwards curve. The problem is, no one can make a living from streaming because the threat of piracy is keeping downward pressure on the amount that can be charged for subscription services
No thanks