How Pay-TV Can Get Netflix Off Its Front Lawn 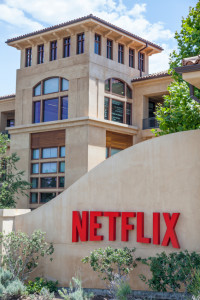 Amidst all the positive news about Netflix’s continuing growth story, some interesting points were touched upon in yesterday’s Netflix Q4 2015 Earnings Interview with analysts. Perhaps the most revealing meta narrative for the whole management zeitgeist was summed up Netflix’s CFO David Wells when he described the gaining the next 50 million subscribers as “a little bit harder than the first 50 million.”

With the world’s largest SVOD (Subscription Video On Demand) service now tipping into mainstream penetration rates in its domestic US market with approximately 50% of US households now being reached by the service, the continued growth has to be found internationally.

Netflix Is All About International Growth

With Netflix now into the second week of its “international launch” and with the company identifying 40% of operating revenue to now be sourced from its international operations, the global ambitions of the company are clearly established. 30 million of its 74 million subscribers are now in non-US markets with 72% of the 5.59 million net additions for Q4 2015 also non-US subscribers.

Netflix has been vocal about its originals strategy being at the forefront of growing this international market and CEO Reed Hastings stated in the earnings call that “The positives from original spending have been tremendous in terms of our international growth, as well as distinguishing and differentiating Netflix from an explosion of other services.” However during the earnings call it was also explained that Netflix intends to roughly maintain a 50/50 ratio of original /or originally branded content to licensed content and that this ratio will inevitably skew towards more licensed content due to inflated overall content budgets.

Netflix’s current commitment of $1billion to be spent on original and licensed programming represents a 7% increase on original programming adding up to 17% of the programming budget. However that means 83% of content will still need to be licensed from outside content providers. And this ties in with Hastings observation on how to reach SVOD laggards in established markets- “People are saying “I’ve been hearing a lot about it but nothing yet has compelled me to join”. The big driver is getting people excited about whatever title we have and then making it easy for them to join.”

And this is where the contradictions begin for Netflix’s international push. Because of their overwhelming dependency on licensed content, Netflix has little room for regional price flexibility if it wants to maintain its margins and preserve its break even targets for the year. Charging $8 dollars for the service in countries like India or the Philippines restricts the service to the high income elites. Yes they may spend $800 dollars on an iPhone, but they are the rare few in countries where monthly disposable income is measured in the cents range for the overwhelming majority.

For a disruptive business like Netflix whose whole value proposition in its domestic market is based upon being a cost effective convenient alternative to traditional pay-TV, the elite’s first international strategy is an oxymoron. In effect Netflix is getting most traction in markets where disruption should be hardest and least in those where it should be easiest.

TV Licensing Needs To Be Updated For the Online Viewing Era

Hastings is right to highlight that Netflix is currently a tiny part of video viewing and that the opportunities for growth going forward are huge. However with monthly price plans currently at the equivalent to an average day’s income in many emerging markets, Netflix will not go mainstream any time soon in the parts of the world where the TV industry currently struggles to effectively monetise. Although licensing rates are cheaper for lower income markets they are still priced too highly. The huge appeal of US TV and films around the world epitomised by rampant piracy in these emerging markets highlights the audience demand for western video content. Pricing is not however set to meet that demand.

TV networks such as Fox are currently engaged in a war of words with Netflix, ostensibly over content licensing rights but in reality over the disruptive threat of cord-cutting posed by SVOD. The mutually beneficial opportunity afforded by affordable licensing to attract lower income emerging market audiences should not be overlooked. Just as Netflix created a lucrative second window market for linear TV content, the SVOD company has the opportunity to do create a new market to the benefit of the wider TV industry. Pay-TV can benefit from Netflix’s unique global footprint by being able to structure new global licensing arrangements which benefit both parties and further monetisation opportunities for   TV content.

But there is a crucial added bonus for TV networks: if they give Netflix licenses that enable it to truly compete on price in emerging markets, Netflix will quickly find its focus shifting from western markets to emerging markets. In this context the second 50 million could be a relative breeze. And in doing so the TV networks will have distracted their key disruptive frenemy partner from their home turf. Granting heavily discounted emerging markets licenses could help get Netflix off TV network’s front laws, for a while at least.