How Apple Subscriptions Will Change Streaming 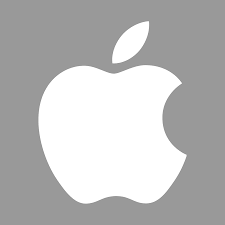 All of the talk this week has been of Jay-Z’s TIDAL and how it might change the streaming market. In reality it is another new entrant that will have biggest near term impact: Apple’s forthcoming music subscription service, which is built on foundations of Beats Music. Beats Music’s acquisition by Apple as part of the Beats deal of course created the premium brand market opportunity for TIDAL, but it is Apple’s pursuit of a more mainstream streaming audience that will most likely create the biggest single disruption to the streaming market since Spotify launched.

Apple’s 21st renaissance all started with music, with the iPod. With the succession of successful products that followed, Apple perfected its early follower model, waiting for others to establish markets and for them to bleed out on the cutting edge of innovation before sweeping in to dominate. Apple left it late for subscriptions but the odds are still in favour of its repeating the cycle. Demand for a music subscription service is high among Apple’s users and streaming incumbents will not relish the arrival of what remains the world’s biggest digital music service. Apple came out of nowhere to become the dominant download store, now it may do just the same for subscriptions. 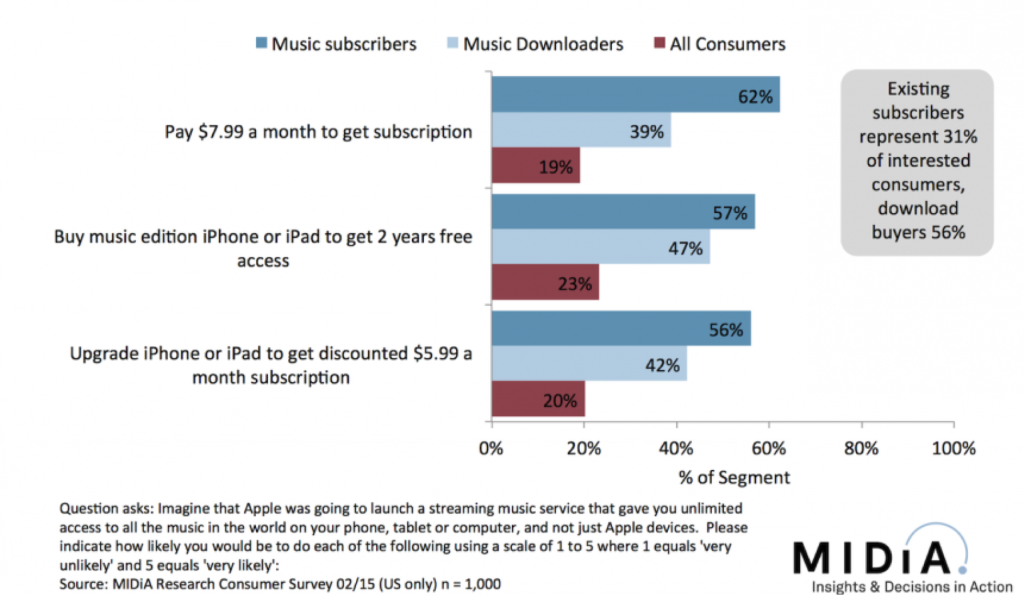 Nearly a fifth of US consumers would pay $7.99 with the rate rising to 28% among iOS users. If 15% of Apple’s entire 500m iTunes users adopted, the total number of subscribers globally would grow by 75 million. Even a year one target of a quarter of that would be transformational to the subscription market but both numbers are far short of the approximately 250 million regular iTunes music downloaders Apple currently has. Nearly the same share of consumers are interested in a subsidized model in which they would get discounted access to the subscription in return for buying a new iPhone or Tablet. This model may have crashed and burned with Nokia’s Comes With Music and Beyond Oblivion, but Apple has a unique opportunity to make it work.

Near term Apple will cannibalize existing subscriptions with 62% of existing music subscribers consider themselves likely to subscribe to an Apple $7.99 service. Apple has lost a lot of its most valuable download buyers to services like Spotify, Rdio and Rhapsody and it will expect to ‘win back’ the digital music spending of some of those consumers. It is no coincidence that this will likely be Apple’s first app developed for Android. Thus the near term impact of an Apple subscription service could be as much about switching existing subscribers as growing the market.

But the long term opportunity is with streaming newbies. Interest levels are significantly lower for download buyers than for subscribers. However downloaders represent a bigger opportunity because there are so many more of them than there are subscribers. Thus while only 39% downloaders are interested they represent 56% of all the interested consumers. So while Apple’s first wave of adopters will likely over index towards existing subscribers, they should be followed relatively swiftly by a cohort of engaged download buyers. Which of course means mid term we will also see a significant downturn in download sales. There will likely be a dead cat bounce in the near term with novice streamers transitioning behaviour and buying more downloads as a result of discovering more new music. But those old habits will fade quickly enough.

Apple is entering the subscription market largely as a defensive measure, to reclaim market leadership and to help slow the leakage of some of its most valuable customers out of the iTunes ecosystem. But if it can find an elegant way to blend the best elements of iTunes Radio, iTunes, Beats Music, Genius and the App Store Apple could end up with the most comprehensive music offer on the market. Apple typically comes into a market relatively late and super charges it. If it does the same with streaming a high tide may raise all boats, despite near term cannibalization. But Apple succeeding is far from a sure thing: Apple is riding the crest of a decade long wave of success. But all good things come to an end. At the end of 2016 we could be looking back at period of flops, of a failed watch strategy and of a failed streaming strategy. The odds are against that happening, but it is far form impossible.