Here’s How Spotify Can Fix Its Songwriter Woes (Hint: It’s All About Pricing) 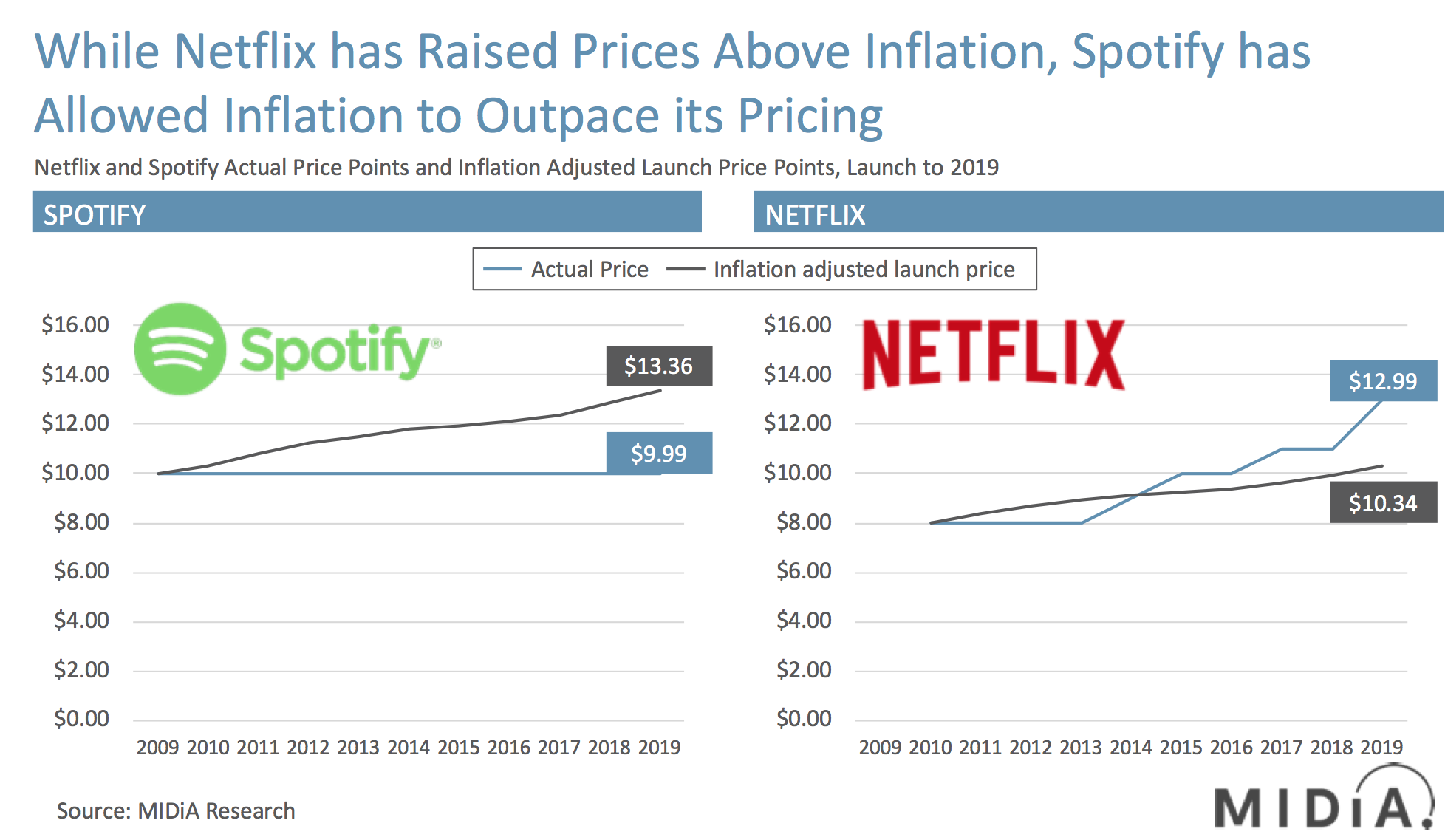 Songwriter royalties have always been a pain point for streaming, especially in the US where statutory rates determine much of how songwriters get paid. The current debate over Spotify, Amazon, Pandora and Google challenging the Copyright Royalty Board’s proposed 44% increaseillustrates just how deeply feelings run. The fact that the challenge is being portrayed as ‘Spotify suing songwriters’ epitomises the clash of worldviews. The issue is so complex because both sides are right: songwriters need to be paid more, and streaming services need to increase margin. Spotify has only ever once turned a profit, while virtually all other streaming services are loss making. The debate will certainly continue long after this latest ruling, but there is a way to mollify both sides: price increases.

When Spotify launched in 2008, the industry music standard for subscription pricing was $9.99. So, when its premium tier was launched in May 2009, it was priced at $9.99. Incidentally, Spotify racked up an initial 30,000 subscribers that month – it has come a long way since. But now, nearly exactly ten years on, Spotify’s standard price is still $9.99. Its effective price is even lower due to family plans, trials, telco bundles etc., but we’ll leave the lid on that can of worms for now. Over the same period, global inflation has averaged 2.95% a year. Applying annual inflation to Spotify’s 2009 price point, we end up at $13.36 for 2019. Or to look at it a different way, Spotify’s $9.99 price point is actually the equivalent of $7.40 in today’s prices when inflation is considered. This means an effective real-term price reduction of 26%.

Compare this to Netflix. Since its launch, Netflix has made four major increases to its main tier product, lifting it from $7.99 in 2010 to $12.99 in 2019. Crucially, this 63% price increase is above and beyond inflation. An inflation-adjusted $7.99 would be just $10.34. Throughout that period, Netflix continued to grow subscribers and retain its global market leadership, proving that there is pricing elasticity for its product.

So why can’t Spotify do the same as Netflix? In short, it is because it has no meaningful content differentiation from its competitors, whereas Netflix has exclusive content and so has more flexibility to hike prices without fearing users will flock to Amazon. If they did, they’d have to give up their favourite Netflix shows. Moreover, Netflix has to increase prices to help fund its ever-growing roster of original content, creating somewhat circular logic, but that is another can of worms on which I will leave the lid firmly screwed.

If Spotify increases its prices, it fears its competitors will not. Likewise, they fear Spotify will hold its pricing firm if any of them were to increase. It is a classic prisoner’s dilemma.  Neither side dare act, even though they would both benefit. Who can break the impasse? Labels, publishers and the streaming services. If they could have enough collective confidence in the capability of subscriptions over free alternatives, then a market-level price increase could be introduced. Rightsholders are already eager to see pricing go up, while streaming services fear it would slow growth. Between them, there are enough carrots and sticks in the various components of their collective relationships to make this happen.

However – and here’s the crucial part – rightsholders would have to construct a framework where streaming services would get a slightly higher margin rate in the additional subscriber fee. Otherwise, we will find ourselves in exactly the same position we are now, with creators, rightsholders, and streaming services all needing more. When Netflix raises its prices it gets margin benefit, but under current terms, if Spotify raises prices it does not.

The arithmetic of today’s situation is clear: both sides cannot get more out of the same pot of cash. So, the pot has to become bigger, and distribution allocated in a way that not only gives both sides more income, but also allows more margin for streaming services.

Streaming music in 2019 is under-priced compared to 2009. Netflix shows us that it need not be this way. A price increase would benefit all parties but has to be a collective effort. Where there is a will, there is a way

Nic Discepoli
19 Mar 2019
Netflix still has an $8.99 / month tier. HD Content is not available on this tier, but SD versions are. What is the mix of Netflix subscribers that subscribe to this lower priced tier? Would you say that the bump in price of Netflix’s Standard $12.99 tier was also warranted by a jump in perceived value (availability of HD and ability to stream on multiple devices at once)? When Netflix launched in 2010, HD devices were less ubiquitous and users owned fewer personal devices, thus the features in the current “standard” tier would be less relevant to the average 2010 consumer.
Mark Mulligan
12 Mar 2019
The post refers to the global launch dates for those services, regardless of which territories they might have been. Additionally 9.99 was the standard music subscription price point, US and globally, and still is now.It traces its US origins all the way back to Rhapsody - long before Spotify
Musicguy
11 Mar 2019
Spotify launched in the US in July 2011. In 2009, it was only available in the UK, FR, ES, FI, NO and SE. It was available in local currency at 9,99 GBP / EUR and at 99 SEK and NOK. All of those were (and still are) much more than $9.99 USD. Would be worth updating your analysis to take that into account.
No thanks