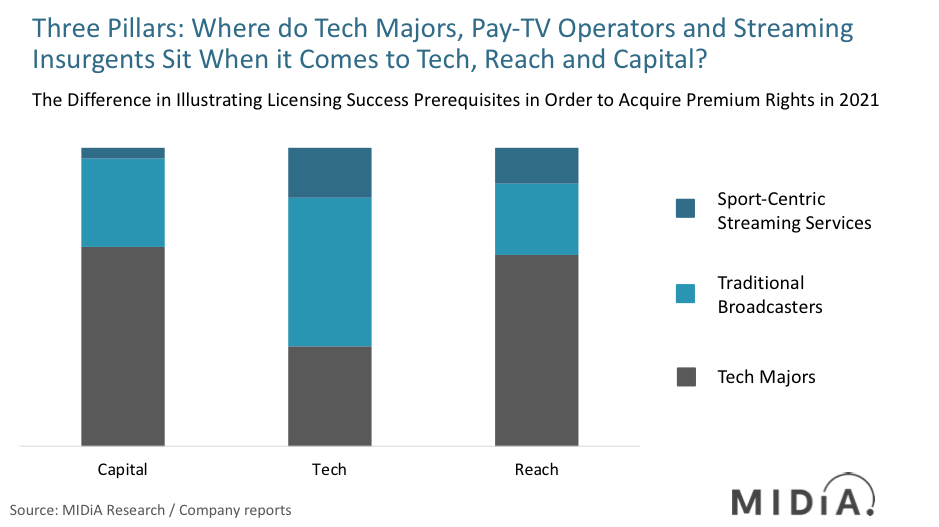 The sports rights landscape has changed fundamentally with the emergence of streaming subscription video on demand (SVOD) services. Digital and broadcast rights used to be separate deals entirely, but now the lines are blurred, and competition is heating up for exclusive coverage of the most sought-after sporting rights.

2018 was the precursor to a new era of sports content distribution with the emergence of sport-centric streaming services, highlighted by the launch of ESPN+, the first major sports SVOD service from a large incumbent (Disney).

2019 is the year when streaming disruption becomes the norm in sports video, leading up to 2021, the ‘D-Day’ for sporting rights, when the premium live rights will come up for renewal (e.g. EPL, UCL, NHL, MLB) in their respective domestic markets. The continued secular decline of pay-TV will converge in an era where streaming video consumption will have become mainstream, which means the requirements for a successful bid will revolve around the following:

Who is best placed to succeed in the future landscape:

Watch out for the Tech Majors come 2021

The tech majors are best placed to succeed when it comes to acquiring these premium rights, dominated in the UK pay-TV era by traditional broadcasters Sky and BT who continue to hold a monopolistic grasp on tier-one sports. This could all be about to change. The systemic decline of subscribers from pay-TV ecosystems is a concern to rights holders, with the NFL announcing last September that its ‘entire model is about reach’, and that it will not simply award the rights to the highest bidder.

Sufficient capital is of course a requirement, with rights holders unlikely to accept a loss in value of premium rights in their domestic markets. No entities are better equipped than the tech majors to afford these valuable assets. The majors also have the luxury of being able to redistribute the rights once acquired without looking like they are diluting their offering, something sports-centric services cannot do without suffering brand damage.

Sport-centric SVOD Eleven Sports gives the best case study for how difficult it can be to recover from overextending. Eleven not only entered the UK with an underwhelming value proposition, but overextended in terms of rights investments, with Serie A and La Liga its main assets for attracting football fans onto its platforms. The inability to secure carriage partnerships with broadcasters as a form of revenue generation once it had secured exclusive rights forced Eleven to forego its assets as it could not offset the risk from investing, something which will concern rights holders.

In terms of reach, globally nobody comes close to Facebook with its 2.38 billion monthly active users (MAUs), something rights holders will be well aware of. If reach is their sole priority, then Facebook would be a much more attractive broadcast partner than streaming services ESPN+ or DAZN, owning only two million (US) and four million (global) subscribers respectively.

Something tech majors and streaming services will have to display in order to entice rights holders into awarding them exclusive domestic rights is a seamless distribution, overcoming latency issues plaguing streaming services thus far when it comes to live broadcasts. One example of how risky this can be is when Australian telco Optus famously acquired the Australian domestic World Cup rights away from broadcaster SBS for AUS $8 million ($6.2 million). The contract entitled Optus to show all 64 matches on its Optus Sport SVOD service at the compelling low price of AUS $15 ($11.4) per month. Due to unforeseen technical issues, the malfunctioning service suffered repeated disruptions and humiliatingly Optus had to refund all of its customers. Optus was forced to sub-license the group stages back to free-to-air broadcaster SBS. Optus also announced free subscriptions running until August 31st, effectively giving up three months of peak subscription revenue, alongside the $6.2 million outlay for acquiring the rights. Without proving a reliable and seamless service (tech stack), one cannot foresee a rightsholder entertaining bids from digital-first services unless they can solve the issues of latency, thereby continuing to give established traditional pay-TV operators the edge in this category.

The next broadcast round for NHL and MLB in the US starts in 2021, meaning these will be the first to see just how much appetite not only the tech majors but also SVOD services have for domestic top-tier rights. The NHL will be the relatively cheapest set of rights to acquire domestically following the conclusion of NBC’s 10-year $2 billion deal in 2021. With Disney-owned ESPN+ airing 180 games in its debut season streaming the sport (having acquired streaming rights through Disney’s BAMTech acquisition), ESPN+ could be well placed to become the home of hockey domestically in the US, already airing more matches than NBC (the exclusive cable rights holder). ESPN+ could also look to leverage Disney’s relationships with the other tier-one rights holders domestically, currently the only operator to hold all four major rights in the US, becoming ‘The’ major force in live sports.

Like all good sporting contests, 2021 will be one of high drama, uncertainty and risk. One outcome is certain, though: change is coming, and it is being led by the streaming disruptors.

This blog is derived from MIDiA’s upcoming report The Emerging New Metrics For Sports Streaming Success, which outlines the three pillars in more detail. To find out how to access the report, please email tommy@midiaresearch.com to inquire