Growth drivers – what comes after streaming 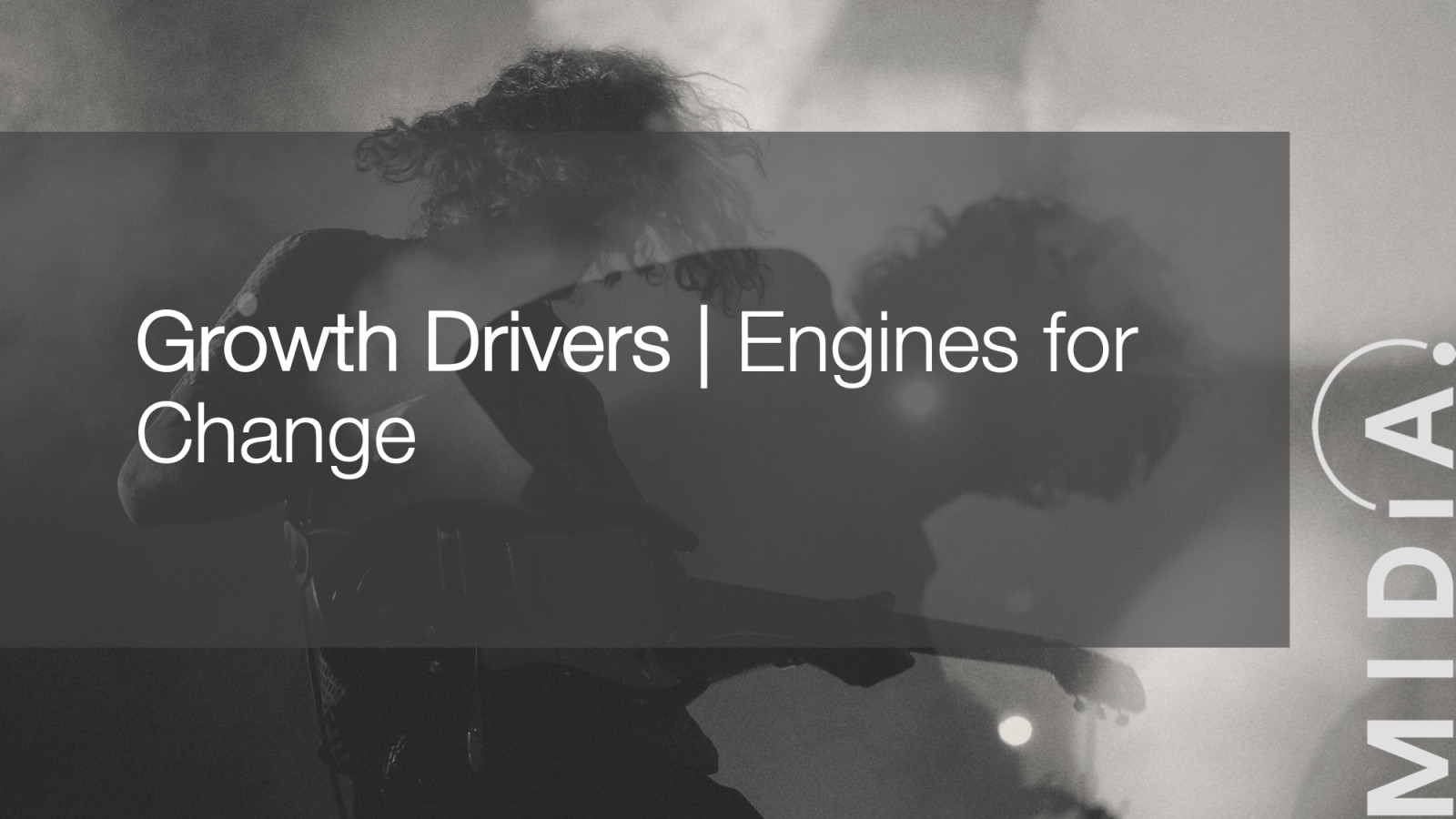 The pandemic-defined 2020 was an outlier year across digital entertainment, with the extra 12% of time consumers spent with entertainment boosting everything, including music. One of the effects was that streaming grew more than it would have otherwise, delaying the inevitable slowdown in streaming revenue growth. This artificial 2020 boost meant that the slowdown impact was felt even more strongly when it arrived in Q1 2021.

The major labels saw streaming revenue grow by just 0.8% between Q4 2020 and Q1 2021, while Spotify saw revenues fall by 1%. Seasonality plays a major role here (a similar trend was seen last year) and year-on-year revenues were up by around a quarter. Nonetheless it reflects a maturing market.

Back in 2019 Spotify’s revenues grew 15.7% from Q4 2018 to Q1 2019, while the majors’ streaming revenue was up 3% between Q4 2017–Q1 2018. In short, when the market was growing faster, seasonality did not result in flat / negative growth. Streaming is still in good shape and is going to remain the core of recorded music revenues for the foreseeable future, and Spotify’s price increases will bring a little extra revenue in 2021, but it is clearly time to start thinking about what comes next.

There is an argument that in today’s post-format world, we should not even be thinking about the next thing. So, it is better to think about what new business models and user experiences can grow alongside streaming, to diversify the music industry’s income mix.

Music businesses, labels in particular, are busy exploring where future growth will come from. The more pessimistic argue that this is largely as good as it gets, that there will not be a ‘next streaming’. That might be right in terms of a single revenue source, but the early signs are that there is enough potential in a range of sources to collectively drive growth. Here are a few of the music industry’s potential growth drivers:

·      Games: Ever since the Marshmello Fortnite event, games has acquired a new degree of importance for the music business. WMG’s stake in Roblox points to just how serious labels are taking the opportunity. With global games revenues hitting $120 billion in 2020 (around $100 billion more than the recorded music market) and more than a third of those revenues being driven by cosmetic (i.e., non-gameplay) spend, there is a wealth of opportunity. But to succeed, music companies will need to think about creative ways to enhance the gaming experience rather than simply seeing it as another licensing play.

·      Social: Revenue from the likes of TikTok and Facebook finally became meaningful in 2020, accounting for around three quarters of the growth registered in ad supported. We are still scratching the surface of what social can do for music, but building tools for users to create their own music and audio will be key. Facebook’s Sound Studio could prove to be a defining first step towards the establishment of the consumer’s version of the social studio.

·      Creator tools: As regular readers will know, MIDiA considers the current revolution in the creator tools space to be one of the most important shifts to the entire music business in recent years. Not only is it transforming the culture of music creation, it represents a new set of opportunities for deepening artist-fan relationships and a set of new facets for the future of music companies.

·      Next-generation sync: Although traditional music sync revenues fell in 2020, music production libraries (including royalty free) grew. We are on the cusp of a major new wave of opportunity in sync, with social content, platform and creators representing a scale of demand that far exceeds that of the traditional sync market. And it is the slow-moving nature of that traditional sector which means that the likely winners in the social sync market will be the new generation of companies that offer solutions that are sufficiently agile and fast to meet the scale of micro-sync demand.

·      Live streaming: The pandemic virtually created the live stream marketplace, resulting in a tidal wave of new start-ups rushing to fill the void left by live. While the results have been a mixed bag, there have been enough high-quality successes to suggest that this is a sector with longevity that will outlive lockdown. The services that will prosper when IRL returns are those that deliver genuinely differentiated experiences that complement rather than try to replace IRL live.

·      Fitness: Another of the pandemic’s second order effects was a surge in consumer spending on home fitness equipment, including Peleton. Right now there is some meaningful music licensing revenue building around the space, but Beyoncé’s Peleton partnership shows that the opportunity goes way beyond simply piping music into workouts. Crucially, the Beyoncé partnership creates an audience that is focusing their entire attention on the artist, which is rarely the case when people are listening to music on audio streaming services.

·      Fandom: Fandom is the next frontier for music monetisation. Western streaming services monetise consumption, whereas Tencent Music Entertainment monetises fandom, with two thirds of its revenue coming from non-music activity. We are beginning to see a flurry of activity in artist subscriptions and meanwhile, Patreon goes from strength to strength. Check out this free MIDiA report for more on how to tap the fandom opportunity.

To reiterate, streaming is, and will remain for many years, the beating heart of recorded music revenue. In fact, more than that, most of these new opportunities exist at such scale because of streaming. Until now, streaming enabled revenue growth in its own right, now it will enable growth in new adjacent markets.

What does it mean to 'fix streaming'?

by Keith Jopling
19 Apr 2021
When I wrote a blog for MIDIA in January 2020 I first coined the term the “ Song Economy ”. At the time I saw it as a good thing - a major growth driver for the music industry to increase the value...

by Tim Mulligan
5 May 2021
After 10 years of uninterrupted growth, culminating in the entertainment bonanza of the great lockdown of 2020, Netflix is now post-growth after missing Q1 subscriber targets. Cue a 10% fall in Netflix’s...

by Karol Severin
13 Apr 2021
Music companies have begun to realise that as their industry has grown, it has also transferred much of its previous fan value into the subscription and song economy. The outbreak of COVID-19 and the subsequent...

Joe Varlaro
3 Aug 2021
Terrific article, Mark, nice work! Sorry I’m just getting to it!
No thanks