German Bundesliga faces 20% decline in value for its international rights 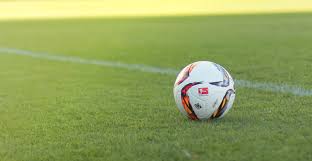 German business publisher Sponsors has announced the German Football League (DFL) is facing a 20% decline in the total value of its overseas’ broadcast rights for the 2020/21 campaign. This is down from the €250 million ($292 million USD) that Bundesliga International (the league’s international sales operation) generated last year.

Despite having secured 50 international rights deals, a 150% increase from 20 during the previous rights cycle, moving on from the previous 80-territory, five-year deal with Fox, Bundesliga International is expecting a €50 million ($58.5 million USD) shortfall. The challenging economic downturn due to the COVID-19 pandemic has been attributed for the deficit.

Some key business for the next rights cycle included a six-year US media rights deal with ESPN worth €35 million ($41 million USD) a year, awarding ESPN+, Disney’s sport-centric proposition, exclusive coverage for over 300 games a season.

This dip in expected international rights comes shortly after the DFL announced the new four-year season domestic rights deal from 2021-2025 is worth €4.4 billion ($4.9 billion USD), an average of €1.1 billion ($1.2 billion USD) per season. The new deal sees Sky Deutschland broadcast 200 games per season, with streaming incumbent DAZN winning exclusive distribution for 106 games in Germany, Austria and Switzerland. The deal represents a 5% decline on the current €4.64 billion ($5.16 billion USD) sum the Bundesliga earns domestically from Sky, Discovery-owned Eurosport (subsequently sublicensed to DAZN) and free-to-air broadcaster ARD. The current cycle saw domestic rights increase 85% from the previous auction, supporting the argument that the sports rights bubble is deflating, with a lack of competition keeping the prices down for the next cycle.

‘Keepy Ups’: Generating brand affinity is key for Bundesliga in the digital era 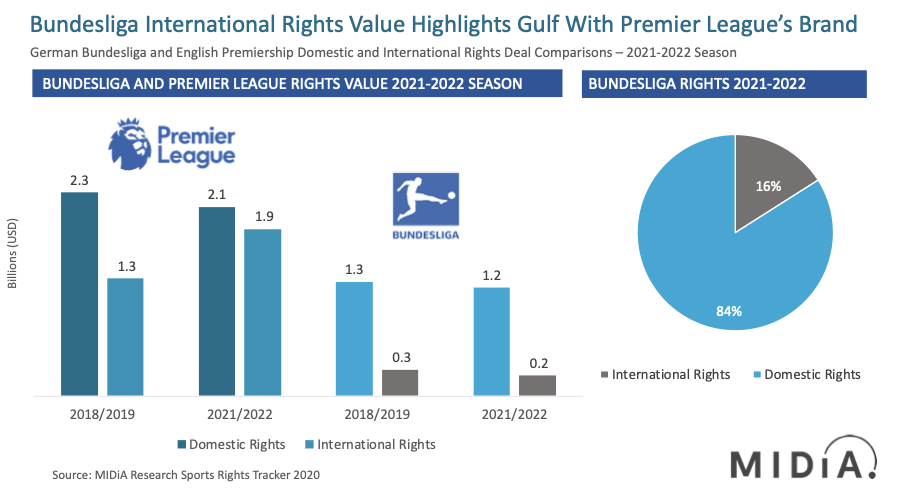 The Bundesliga has failed to capitalise on harbouring the Champions of Europe Bayern Munich and arguably the largest international conveyor belt of elite football talent in Borussia Dortmund to leverage its brand equity overseas. COVID-19 allowing, the EPL will generate $1.9 billion in 2021/2022, the last year of its current rights cycle. Although the EPL’s domestic rights cycle valuation decreased 13.2% compared to the 2016-2019 seasons, due to its global brand, its international rights drove an overall 8% increase in total current broadcast rights to $12 billion.

The 2021/2022 season differential is even more indicative of the gulf between the two major leagues, with this being the first season of the newly-tendered Bundesliga rights cycle. The EPL will make over eight times more from international broadcast rights deals than the Bundesliga, highlighting the disparity in appetite for both leagues overseas.

The Bundesliga is ahead of the curve domestically, returning to our screens ahead of the EPL in May, demonstrating what the new spectacle of sport will look like while pandemic-enforced empty stadiums greet viewing sports fans. The Bundesliga also brokered the ground-breaking deal in June, awarding DAZN with domestic rights for 106 games for the 2021-2024 seasons, representing the largest package of major domestic football rights ever awarded to a streaming service in Europe.

The transition to streaming is arguably the most important strategic factor shaping the future of sports rights. With traditional pay-TV subscriber bases in decline and streaming services growing, the wider audience shift in video consumption is reshaping sports video audiences: something the Bundesliga is ‘tripling’ down on, awarding DAZN a major share of its domestic rights. The Bundesliga needs to prioritise generating digital engagement overseas if it has any hope of bridging the gap with its English rival for international appetite.

by Alistair Taylor
19 Aug 2020
COVID-19 exposed live entertainment as a vulnerable asset class , specifically following the pandemic-enforced postponement of live sports . One of the hardest hit during this hiatus and ensuing uncertainty...

by Alistair Taylor
6 Aug 2020
Just when sports fans thought it was safe to go back into the water, COVID reared its ugly head once more. UK fan pilot sporting events were all set to start allowing fans back into arenas and attend live...

Mulan – a tale of international compromise leaving no one satisfied

by Tim Mulligan
14 Sep 2020
A year unlike any other continues to throw curveballs at media companies with strong digital and international footprints. The live-action remake of the popular 90’s Disney animation Mulan has been 10...
No thanks