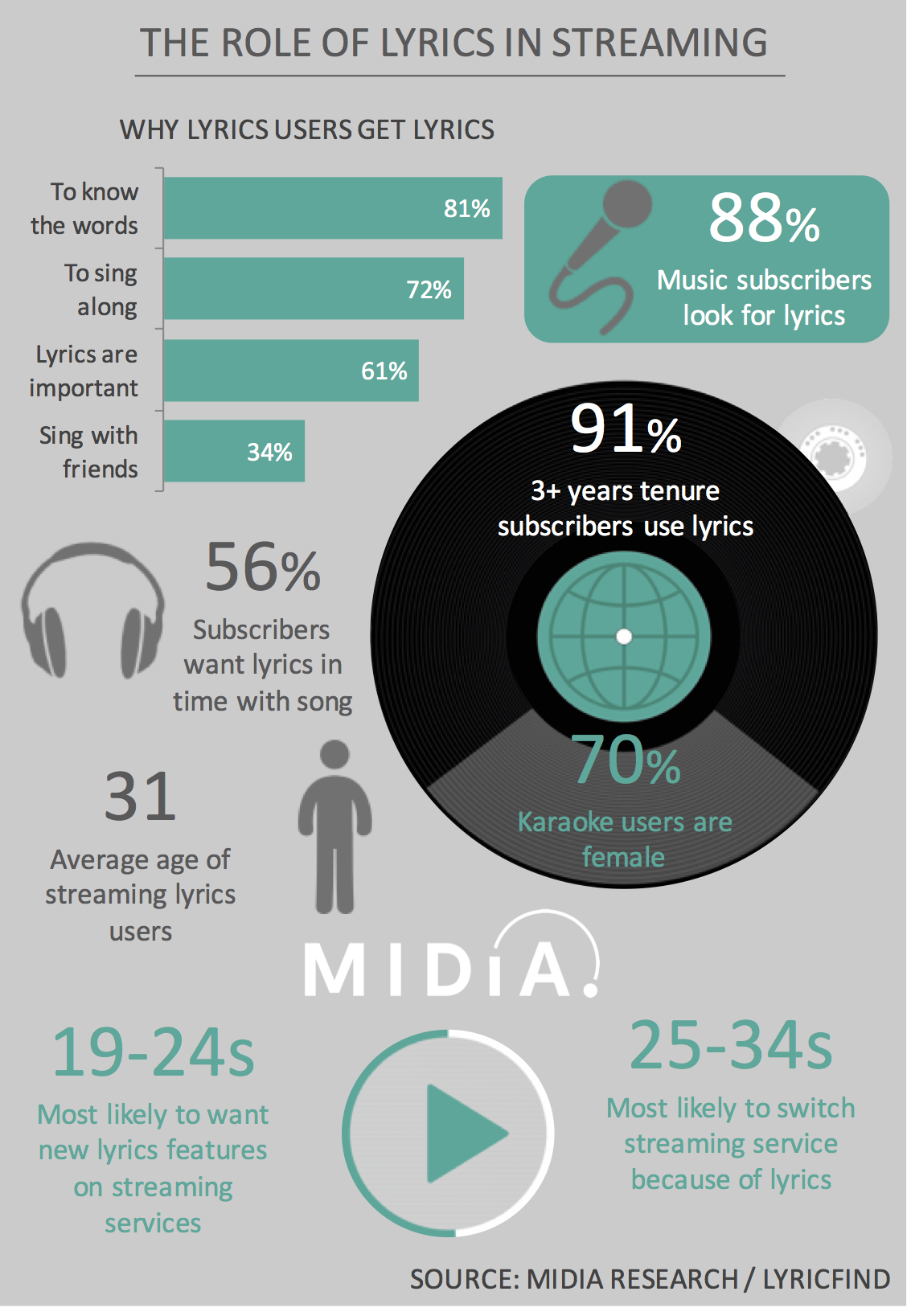 We are pleased to announce the publication of a brand new, totally free, Streaming Music report. In this report, we present the findings of an exclusive consumer survey fielded in November 2017 to consumers in the US, UK and Germany, deep diving into streaming behaviours and the growing role that lyrics is taking. The report download link can be found at the bottom of this post.

The report includes data on:

Here is an overview of some of the findings of the report that we wrote on behalf of LyricFind. Streaming music has put the audience in control, letting music fans choose what, when and where they listen. One of the most dramatic changes that streaming has enabled is the expansion of music from a lean-back, linear experience into something far more engaging and interactive. Now fans lean forward to choose the songs they want, build playlists, comment and share. Lyrics are centre stage in this shift, transforming from static-print-hidden-away-inside-album-sleeve notes, to a dynamic extension of the music itself. Lyrics permeate the streaming music ecosystem, from websites, through YouTube and Vevo to the streaming services themselves.

Whereas lyrics in the analogue era used to be domain of music aficionados, in the streaming era they are a mainstream behaviour for audiences as diverse as they are widespread. The motivations are similarly varied, with the most cited being to know the words (81%) followed by being able to sing along (72%). Among streaming services users who are music subscribers, penetration of lyrics usage rises to 88%. What is more, lyrics have a strong link with music subscriber loyalty among 91% of all music subscribers that have been using lyrics for more than three years.

However, many lyrics users want more out of their lyrics experiences, with 56% of subscribers wanting lyrics to be in time with songs. Younger users, in particular, are raising their expectations, with 16-24 year olds the most likely to want new lyrics features.

Streaming is transforming music consumption across the board

Music consumption is in the midst of a transition period, with streaming rapidly ascending to become the dominant format. As with any transition, the old world coexists with the new, due to old habits dying hard and older groups of consumers changing behaviours slower. Thus, we see radio (66%) and free streaming (43%) as the two dominant forms of music consumption. Crucially, a strong overlap exists between the two: 72% of streamers listen to radio and 47% of radio audiences stream music. This indicates: a) that the transition will pick up pace, as nearly half of radio listeners are already swapping out some of their radio listening time for streaming; and b) that there currently remains enough that is different between radio and streaming for the two to coexist. The biggest takeaway though, is that streaming has a massive amount of growth potential ahead of it.

Lyrics are an integral part of the streaming experience

Lyrics are at the centre of the streaming music experiences: 79% of all music streamers use lyrics, rising to a comprehensive 88% of music subscribers. Wanting to know the words to songs is the main driver, with 65% of music subscribers stating this as their reason for using lyrics. Next, 55% of subscribers and 51% of free streamers said they wanted to be able to sing along with their favourite song. More social activities like singing with friends and karaoke score relatively lowly, indicating that lyrics are a very personal and integral part of how music fans interact with music.

Lyrics have a clear correlation with music subscriber tenure and with churn. The longer that consumers have been music subscribers, the more likely they are to use lyrics, while consumers that have cancelled their subscriptions are much less likely to use lyrics. Across Deezer, Spotify and Google Play, an average of 98% of subscribers with three plus years tenure use lyrics. This contrasts with lyrics penetration among churned out subscribers, with an average of just 60% across the same three streaming services. The importance of lyrics features is further underscored by the fact that 55% of streaming lyrics users say they are more likely to pay for a streaming service that ‘has great lyrics features’. For music subscribers overall, the rate is 43%, rising to 48% of Deezer users and 52% of Tidal users. Raftaar
10 Jul 2019
Really so good and best !!!
99Lyricstore
10 Jul 2019
It just Awesome streaming Lyrics
Mausiqi
29 Apr 2019
Hey Mark! Awesome Man; looks like you've done great research ?
iLyricsHub
18 Apr 2019
Thanks for this awesome view on streaming lyrics. really awesome
preet
1 Feb 2019
I have been a keen follower of your website. recently I came across this topic and after reading the whole article I am amazed that how well you have written it. All Latest <a href="https://dj-jatt.in/" rel="nofollow">Punjabi Song</a> with Music Videos and Quotes - Here is the New Punjabi Songs list 2019 containing Best mp3 song of 2019 <a href="https://www.dj-jatt.in/song/1/190/One-Man.html" title="one man singga/" rel="nofollow">Punjabi Song</a>
Twinkle Sinha
6 Jun 2018
I search lyrics for sing the song with correct lyrics.
Lyrics Take
8 Apr 2018
Such a good post. I like image of “THE ROLE OF LYRICS IN STREAMING" it's perfect calculation.
David Daniel
27 Jan 2018
Thanks for this wonderful insight on streaming lyrics.
No thanks