Fox News to ‘New Fox’: What is Left After Disney Deal 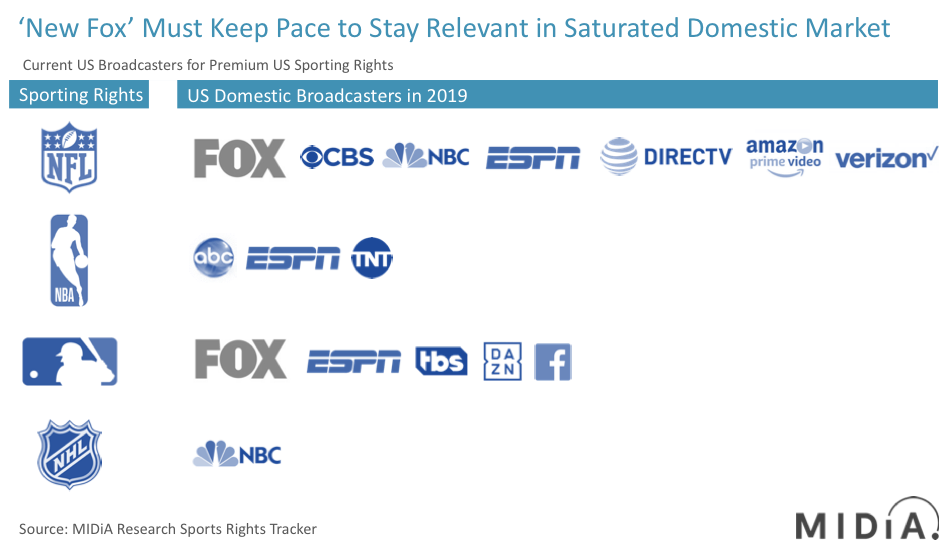 What did Disney acquire?

Within this haul of Fox assets comes established franchises such as the X-Men, Fantastic Four and Deadpool, which Disney adds to its already strong Marvel Cinematic Universe offerings. Coupled with its Pixar and Star Wars brands, this provides Disney with a serious arsenal ahead of the Disney+ launch later this year.

Disney is now in a stronger position to keep up with the tech majors as they look to grow a larger presence in the video landscape.

What is next for Fox Corporation?

While Fox’s content portfolio has been sliced significantly, being stripped of its scripted drama and film propositions, it still retains a valuable proposition in terms of sports. This is in keeping with Rupert Murdoch’s bet on the increasing value proposition of live TV content in an era of on-demand video content. To realise this, New Fox is now doubling down on premium sports and live news.

Fox therefore needs to establish itself as the go-to destination for premium sports domestically, pursuing key premium rights to the NFL, NBA, NHL & MLB. The problem currently is that these rights are fragmented domestically with multiple services and broadcasters owning portions. The crucial inflection point for Fox will come in 2021/2022, when the domestic rights start to come up for renewal.

Maintaining domestic relevancy is its only play

Of the four premium sports franchises in the US, Fox owns rights to the NFL and MLB. Just last November, Fox Sports signed an extension with the MLB worth $5.1 billion, keeping the World Series, All-Star game, postseason games, and Saturday fixtures on Fox for the next 10 years, thus maintaining its position as the premier destination for baseball. Similarly, with NFL Fox has the NFC package, arguably the more prestigious (in terms of Super Bowl victories) when compared to CBS’s AFC package. Fox also agreed to a $3 billion five year deal to air Thursday Night Football (11 games), positioning itself as the majority broadcaster in terms of live games.

All in on sports

In order for New Fox’s live TV bet to play out, Fox needs to retain its seat at the table come 2022 when its NFL rights expire. Sports and news will become a tougher proposition to sell to advertisers and TV operator partners without maintaining premium domestic rights. With domestic NBA rights renewing in 2025, Fox should look to add the league with the second largest social media following globally (behind UEFA Champions League) to its roster, while also in the nearer term acquiring a portion of the NHL rights which renew in 2021. The real challenge for New Fox, however, will be maintaining the premium consumer value proposition around traditional long-form sports content in the era of eSports and on-demand streaming alternatives.