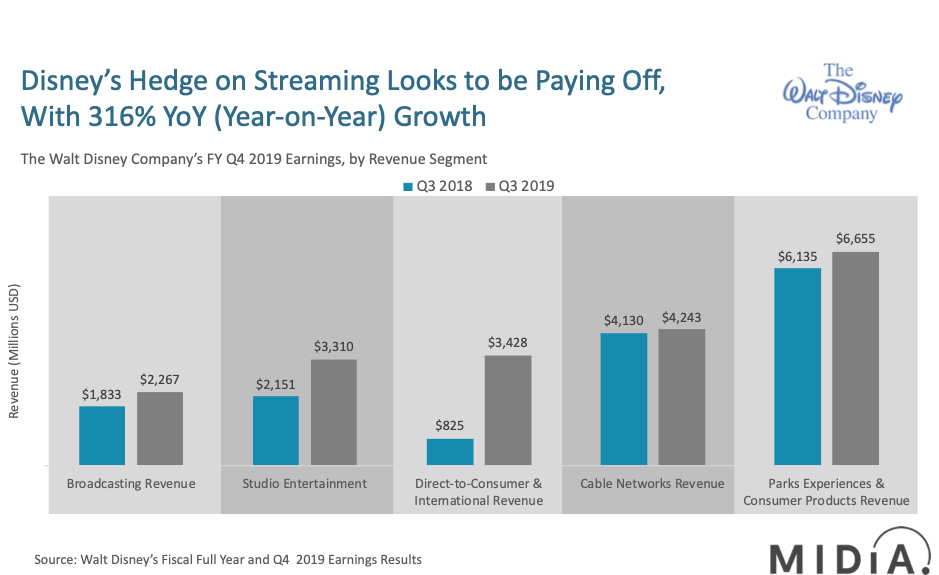 Disney claims unexpected traffic on its newly-launched service was at fault for the buffering and technical issues of Disney+’s launch Tuesday. The issues highlight just how difficult it is transitioning from a media company to a tech player, with technical glitches an enormous issue for digital-native subscribers.

Where does this leave the House of Mouse?

With Disney+ launching less than two weeks after AppleTV+, the market is becoming even more saturated – and this is before NBCUniversal’s Peacock and Warner Media’s HBO Max come to market next year. With NBCU taking back its rights of the US Office, Warner with the ability to withdraw Friends, and Disney with its Marvel content, Netflix’s proposition will be weakened as a consequence, opening up opportunity to seize market share.

It all comes back to peak attention, with only so many hours in a day and only so many subscription dollars at consumers’ disposal. Not to mention with the looming recession around the corner, consumers will become even more careful of where to allocate their finite resources. It will be difficult for these services to gain consumer attention and market share when they’re also competing with music streaming subscriptions, podcasts, gaming, sports, sleep etc. Unlike just a few years ago, growth will now largely come at another services’ expense.

The notion that all these services can complement each other (at least temporarily) is fading, with MIDiA’s quarterly survey data showing a secular decline for consumers holding three or more digital subscriptions falling from 24% in Q3 2017 to just 17% in Q3 2019.

Disney is in danger of enforcing the tyranny of choice on its consumers, the phenomenon most frequently associated with having to trawl endlessly through Netflix to find content one really wants. Via Twitter announcements over the course of three hours, Disney unveiled some 629 titles accessible to subscribers from day one on the streaming platform. If Disney+ users find it difficult to navigate through its vast catalogue, Disney risks to replicate one of the Netflix subscribers’ biggest bug bears: giving them too much choice, making it harder to find exactly what they want.

Coupled with the tech issues Disney displayed by failing to cater for a larger concurrent audience than anticipated, this will not instil confidence in consumers looking for which services to allocate their finite subscription dollars towards.

MIDiA’s Q3 quarterly survey illustrates that Disney as a brand has 96% awareness in the US, and with its unrivalled family-centric archive and $6.99 price point, it is already an intriguing proposition. Looking solely at weekly active usage of the key services in the US, Disney’s bundle presents a truly competitive force, while aggregating ESPN+ and Hulu ranks Disney’s services second for usage (even before Disney+), three percentage points ahead of Amazon Prime Video (source: MIDiA Research).

The best opportunity for Disney to truly become the go-to video destination is with the future bundling of ESPN+, Disney+ and Hulu. This would provide Disney with a suite of platforms to not only compete with Netflix (and win) with an all-encompassing value proposition, but also appeal to the valuable demographic who still retain pay-TV subscriptions. Hulu (according to Bob Iger) is the best consumer streaming proposition on the market in terms of encompassing all aspects of video content (scripted drama, film, news and live sports), so bundling ESPN+ thereby further leverages ESPN’s relationship as the only broadcaster to have distribution deals with all four major franchises in the US (NHL, MLB, NBA and NFL). Hulu also gets all of FX’s archive come March 2020, increasing the unique value proposition even further, with the bundle offering a true digital pay-TV solution.

Disney will be pleased with the 316% year-on-year (YoY) growth of its direct to consumer (D2C) and International revenue segments ahead of Disney+’s launch as it looks to future-proof its video revenues with its entry into streaming. Disney’s Studio Entertainment and D2C & International segments propped up an otherwise flat Media Networks division, as pay-TV subscriptions continued to experience a secular decline in US households. It should be noted that the cause of this growth is the inclusion of 100% of Hulu since the 21st Century Fox acquisition, (which was previously only Disney's 30% ownership stake) and the entire Star India revenue is accounted for (including satellite and Hotstar). Media Networks’ contribution to overall Disney revenue declined from 42% in Q3 2018 to 34% in Q3 2019 as it doubles down on streaming.

Disney’s major unique selling proposition (USP) is its family-orientated image, having captured the hearts and minds of families and kids for decades off the back of its Pixar, Walt Disney Pictures, Star Wars and Marvel motion pictures (strengthened from its 21st Century Fox acquisition). Leveraging Disney’s brand equity when it launches in emerging markets should enable Disney to weaponize its content, positioning itself as no longer a purely additive service but as a domestic and international substitutive service. The timing is also crucial: with AppleTV+ gearing its focus at families and launching two weeks prior, and with the likes of Warner Media, Comcast and NBCU soon bringing their own propositions to market, Disney cannot afford to allow its core audience to embed themselves within competing ecosystems. The mood in the Disney camp will be buoyed by the fact Disney+ surpassed 10 million sign ups on day one, highlighting the excitement and demand for this compelling proposition.