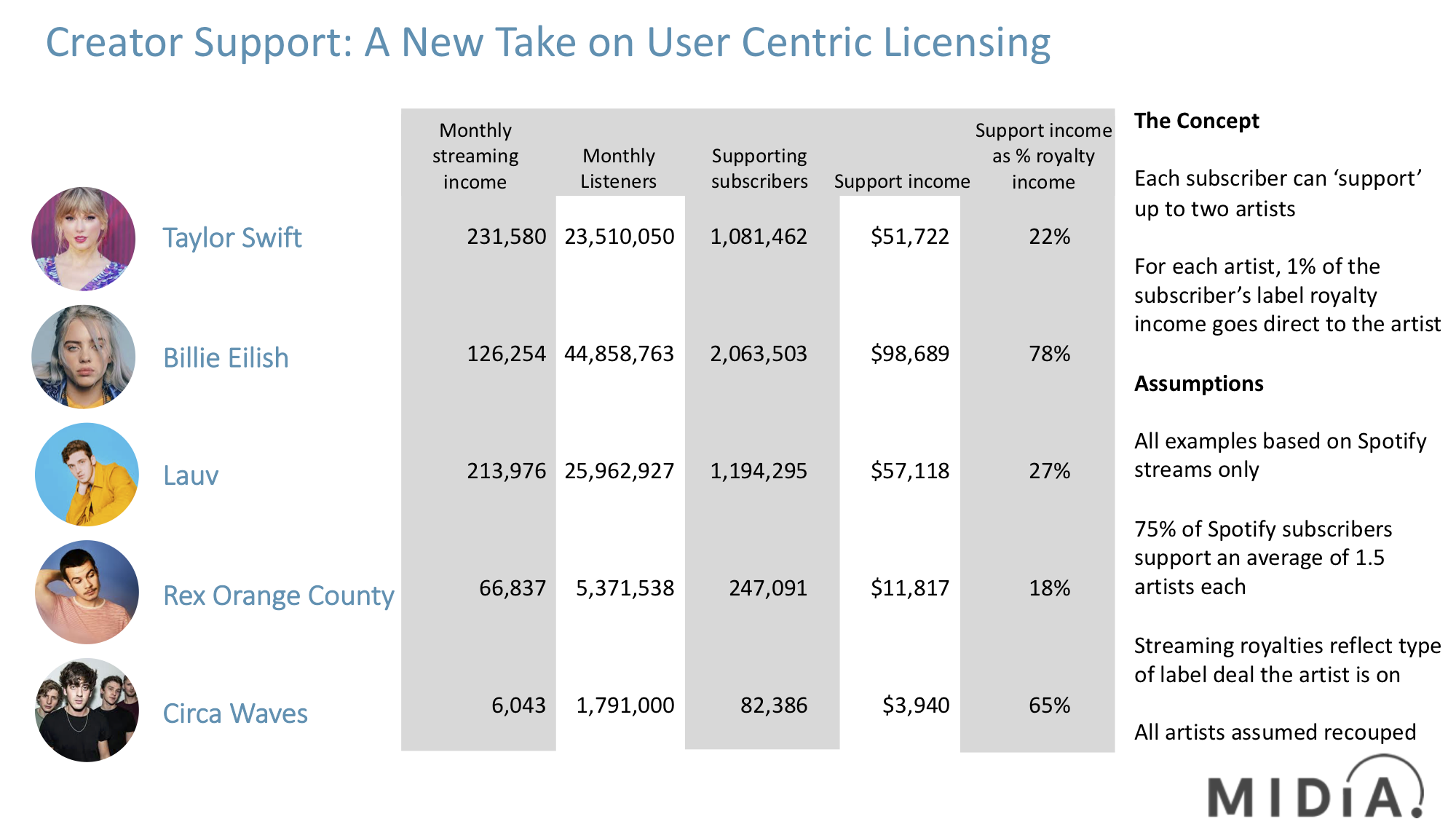 User-centric licensing (i.e. stream pay-outs based on sharing the royalty income of an individual user split across the music they listen to) has stimulated a lot of debate. I first explored the concept of user-centric licensing back in 2015and stirred up a hornet nest, with a lot of very mixed feedback. The big issue then, as now, was that it is a very complex concept to implement which may well only have modest impact on a macro level but may also have the unintended consequence of worsening income for smaller artists. Fans of smaller artists tend to be more engaged listeners who generate a larger number of streams spread across a larger number of artists. The net result could be lower average income for smaller indie artists, and higher income for mainstream pop acts who have listeners with lower average streams spread across a smaller number of artists. Since then, Deezer has actively explored the conceptand it continues to generate industry discussion. It is unlikely there will ever be consensus on how user-centric licensing should work, but the underlying principle of helping artists earn from their fans remains a valid one. So, here is an alternative approach that is both pragmatic and far simpler to implement: creator support. A new way to solve an old problem.

Creator support is gaining traction across the digital content world

In the on-demand world, monthly streaming income for creators can be both modest and unpredictable. Amuse’s Fast Forward,YouTube’s channel membershipsand Patreon are illustrations of how the market is developing solutions to give content creators (especially artists, podcast creators, YouTubers and Twitch streamers) an effective way to supplement income. But it is Epic Game’s ‘Support-A-Creator’ modelthat provides the best example of an alternative to user-centric licensing. Epic Games enables Fortnite players to choose a favourite creator to support (which typically means YouTube and Twitch Fortnite players). Epic Games then contributes the equivalent of around 5% of all in-app purchases that the gamer makes to that creator.

How creator support can work for music streaming

Using Spotify and a selection of artists as an illustration, here is how a creator support approach could work for streaming music:

To illustrate how creator support can work, we created a model using Spotify and a selection of diverse artists. We assumed that 75% of Spotify subscribers support an average of 1.5 artists. In the above chart we took five contemporary frontline artists across major labels and label services, and we assumed that 10% of their monthly Spotify listeners support them. Factoring the different types of deals and royalty rates these artists have, as well as the ratios between average monthly streams and monthly listeners, there is an intriguing range of revenue impact that creator support delivers. For Taylor Swift (on a major deal, but one in which she held the negotiating whip hand), Lauv and Rex Orange Country (both on Kobalt label services deals) the creator support income is between 18% and 22% of their existing streaming royalties from Spotify. For Billie Eilish and Circa Waves, both on their first major label deals, creator support income would represent a much larger 78% and 65% of streaming royalties. The rate is higher for Billie Eilish as she has a higher streams-to-listeners ratio.

Putting aside the irony that this approach would help put many major label artists more on par with what label services and independent artists earn from streaming, the clear takeaway is that creator support can be an effective way of fans ensuring that some of their streaming spending directly benefits their favourite artists. Because we have structured the model to be just 1% per artist (rather than Fortnite’s 5%) the net impact on the total label royalty pot is minimal. Applying the above assumptions to Spotify’s 2018 label payments, the royalty pot (and therefore per-stream rates) would reduce by just 1.13%, meaning that non-supported artists would feel negligible impact.

We think the creator-approach model enables labels and streaming services to deliver on the ambition of user-centric licensing without the complexities and unintended inequities. But perhaps most importantly, it helps put artists and fans closer together, bringing the pledging model to the mainstream.

Let us know what you think. Also, we’ve added the excel model to this post for you to download and test your own assumptions against it.

Jean-Robert Bisaillon
29 Apr 2019
You are describing a lead-performer-user-centric model and not a creator one. You will not solve the problem of lyricists and composers with this. The idea must be developed further. Regards.
No thanks