Can the NBA Capture the ‘Cord-Nevers’? 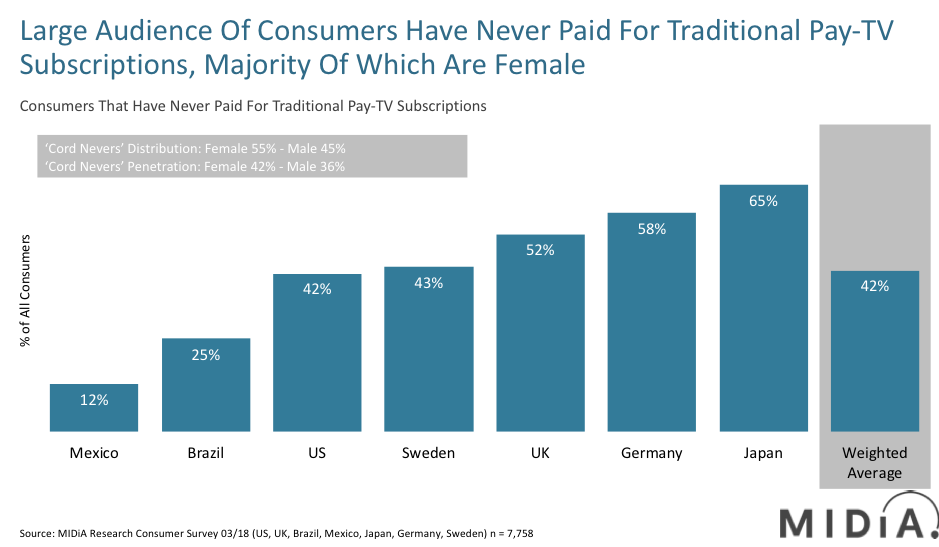 Having experimented with virtual reality (VR), through integrating the technology via Turner Sports broadcasts, Silver touched on the untapped potential for innovation from a broadcast standpoint. This includes the adoption of Second Spectrum’s ‘Clippers CourtVision’, where fans can customise their viewing experience through the use of augmented reality (AR) and data visualisation. This is all part of the NBA’s plans to “stay current”, for if they don’t keep up (or ahead) with digital trends, Silver expects a “massive drop off”.

One of the NBA’s latest ambitions is to attract the ‘cord-never’ audience, those consumers who have never paid for pay-TV subscriptions:

Adam Silver explained that more people are watching live sports on TV than ever before and those that don’t have access to HD TVs are watching sports on “whatever devices become available to them”. ‘Cord-nevers’ make up a large portion of this audience, as they never established payment relationships with cable / satellite providers. Premium sporting rights will never have been a reason to retain a subscription, if one never existed in the first place.

According to MIDiA Research’s annual survey, 42% of the US adult population (approximately 111 million) are ‘cord-nevers’. Interestingly only 4% of ‘cord-nevers’ stream live sports compared to a 10% US consumer average, which poses the question: are these consumers less likely to convert to paying for premium sports or, is it that there is a lack of appealing premium sporting rights available on non-TV devices?

As Silver submitted, the average time viewers spend watching an NBA game is 32 minutes, 16 minutes shorter than the length of a game. The NBA is intent on innovating and making broadcasts interactive, leveraging advancements in digital technology, ultimately driving in-game fan engagement to retain and attract fans.

With local and national television broadcasts still bringing in the majority of revenue into the league, it will be concerning for the NBA that subscriptions of pay-TV have declined in the US by eight percentage points since Q4 2017 (Source: MIDiA Research). The key driver is cord cutting in favour of more affordably-priced subscription-video-on-demand (SVOD) services. This brings up the importance of the next round of NBA broadcast rights deals – with the current deal expiring in 2025 – where the NBA has to cater to the digital native consumers, who no longer subscribe to pay-TV, where the majority of their rights sit.

The importance of ‘cord-nevers’ to the NBA is highlighted by the ageing population of pay-TV subscribers, with consumers over 45 accounting for 54% of the pay-TV audience in the US (Source: MIDiA Research). The future of sporting fans exists online and away from traditional pay-TV subscriptions. In the US, 57% of ‘cord-nevers’ are under 35 and 62% are female. Silver’s suggests that increasing female participation in college basketball while expanding coverage of the WNBA, will drive female fans towards the premier basketball league (NBA) and grow this audience. This is a risky notion as the two are entirely different propositions. If this works however, the NBA will be able to unlock a previously less addressed (female) audience for live basketball.

One potential avenue for avoiding the cliff edge caused by the ageing demographic is converting fans of e-sports to live sports fans. The NBA forming the NBA 2K League through its partnership with Take Two interactive could be the springboard to entice gaming fans of the virtual league into the real ecosystem. The NBA owns the second-largest social media following globally (72 million across Facebook and Instagram) among sporting leagues, only trailing the UEFA Champions league (101 million). This means it has an incredible digital presence, it just needs to convert them into loyal, paying customers.

One innovative implementation by the NBA, was enabling one-off purchases for individual games and quarters through its website and app. Silver believes addressing the finite time available at consumers disposal, offering smaller windows and micropayments will also help entice those consumers who never forked out for expensive pay-TV subscriptions.

The experiments with VR and AR are interesting initiatives, but success will ultimately be measured on engagement and with only 4% adoption for US consumers and US ‘cord-nevers’ respectively for owning a VR headset, this is unlikely to push the needle anytime soon.