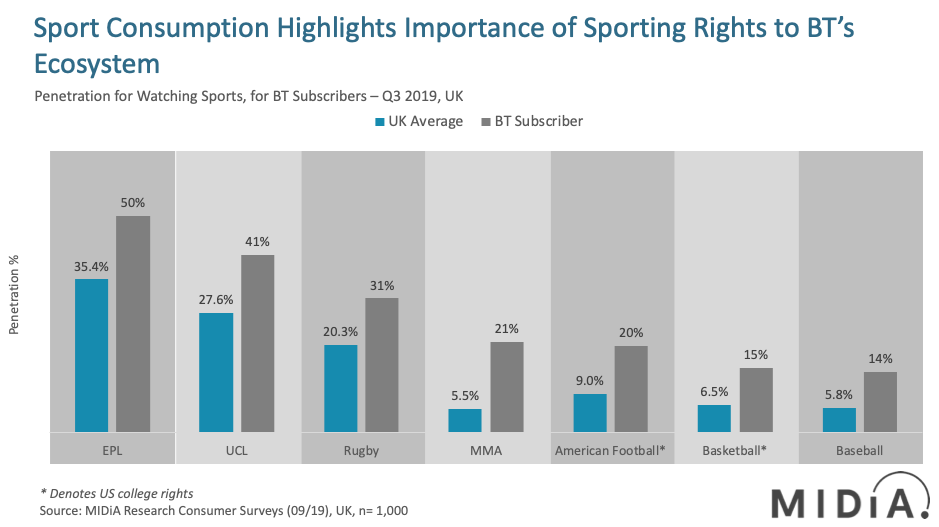 The strategic dilemma as to whether rights holders should seek revenue over reach when allocating domestic rights is inevitably impacted by how dependent services are on premium rights for securing subscriber revenue. A case-in-point is UK telecom BT, which paid $1.5 billion (£1.2 billion) to retain its exclusive ownership of the UK UEFA Champions League (UCL) rights for a further three seasons.

From 2021, BT will show all 420 UEFA Champions League (UCL), UEFA Europa League and new Europa Conference League games for three seasons, 77 more matches than its previous deal, including highlights and in-match clips. Remaining the exclusive home for UCL was crucially important for BT due to its dwindling pay-TV subscriber base, which is compounded by the cord-cutting phenomenon – with UK pay-TV households now down to 42% in Q3 2019 (source: MIDiA Research).

BT has owned the exclusive UK rights for the UCL since 2015, making every game available on TV and via the BT Sport app. BT was also the first broadcaster to put the finals on YouTube for UK consumers. This, combined with highlights on the social platform, allows for non-subscribing soccer fans to engage with the content on the broadcaster’s channels. Considering only 11% of 16-24 year olds have access to BT TV in their households, opening up the premium content to a platform with 48% penetration for weekly engagement (source: MIDiA Research) of the same demographic makes logical strategic sense – particularly considering 57% of UCL consumers are also YouTube weekly active users (WAUs). This blend of linear and digital distribution is something rights holders (e.g. MLB), not just broadcasters, are experimenting with to reach different (largely untapped) audience demographics.

European soccer rights have prospered over recent decades from licensing to new platforms that needed the exclusive premium content to grow their market share, led by Sky with the EPL, and BT with UCL in the UK market. This dependency of acquiring premium content to grow one’s subscriber base and competition for subscription dollars drove demand, which in turn inflated the price of these premium sporting rights, creating a sports rights bubble. With streaming services entering the fray, offering to underserved (younger digitally-native) audiences, rights holders appreciate there to be a heightened level of competition and demand for premium rights as these services have an immediate need to get their value proposition rights. Thus, rights holders are still inclined to partner with the highest bidder, rather than with services offering unrivalled reach.

With streaming insurgent DAZN reportedly submitting a tender for its first UK rights bid, UEFA’s decision not to award these rights to DAZN may well have been impacted by the lack of UK competitive experience of DAZN to date. DAZN’s US operation has highlighted difficulties in changing sports viewing for sports fans in mature and highly competitive sports markets, where it decided to double its entry subscription price point to $19.99 and subsequently insert advertising behind its paywall. UEFA has decided to err on the side of caution by awarding its UK exclusive rights to BT, which it had partnered with from 2015. Opting against Sky, ITV and DAZN, UEFA has made a statement of its preference to work with a proven entity, delivering reliable distribution (albeit to a smaller, older broadcast audience), displaying a sustainable business model. UEFA received a 6% increase on its previous rights cycle, with BT showing the importance that the crown jewel of European soccer has to its overall offering and effectively showing its willingness to over-pay against industry trends to retain the rights.

This raises the question - how heavily does BT’s proposition and sustainability rely on owning exclusive UCL rights?

BT’s current sporting rights, and subscriber consumption of said rights, illustrates just how important its domestic EPL package, UCL and rugby rights are for BT. 41% of BT subscribers watch UCL and 50% watch EPL, far higher than the UK average consumer (source: MIDiA Research), highlighting the need for BT’s overall proposition to exclusively retain one of the most sought-after pieces of video content within its ecosystem.

UEFA will have fluttered its eyelashes enough at DAZN to help pique BT’s interest over the veiled threat that the rights would be licensed to DAZN, keeping the price high. In short, BT needs UEFA more than UEFA needs BT; however, it would have been a higher risk for UEFA to partner with DAZN, a market disruptor without a proven business model of delivering tier one sports rights to UK paying subscribers. The recent failure of Eleven Sports to deliver tier one streaming sports content to UK subscribers has underlined the potential distribution risks for UEFA.

The key takeaway from all this that a challenged incumbent is willing to overpay to retain exclusive premium sports aiding and abetting a franchise holder who is not yet prepared to invest in digital streaming alternatives in a key market. The inexorable secular trends towards sports streaming, however, means that this is likely to be one of the last reflex analogue deals which we will see playing out in the UK market for a sizeable rights package. After all, you cannot defy market and consumer demand indefinitely.