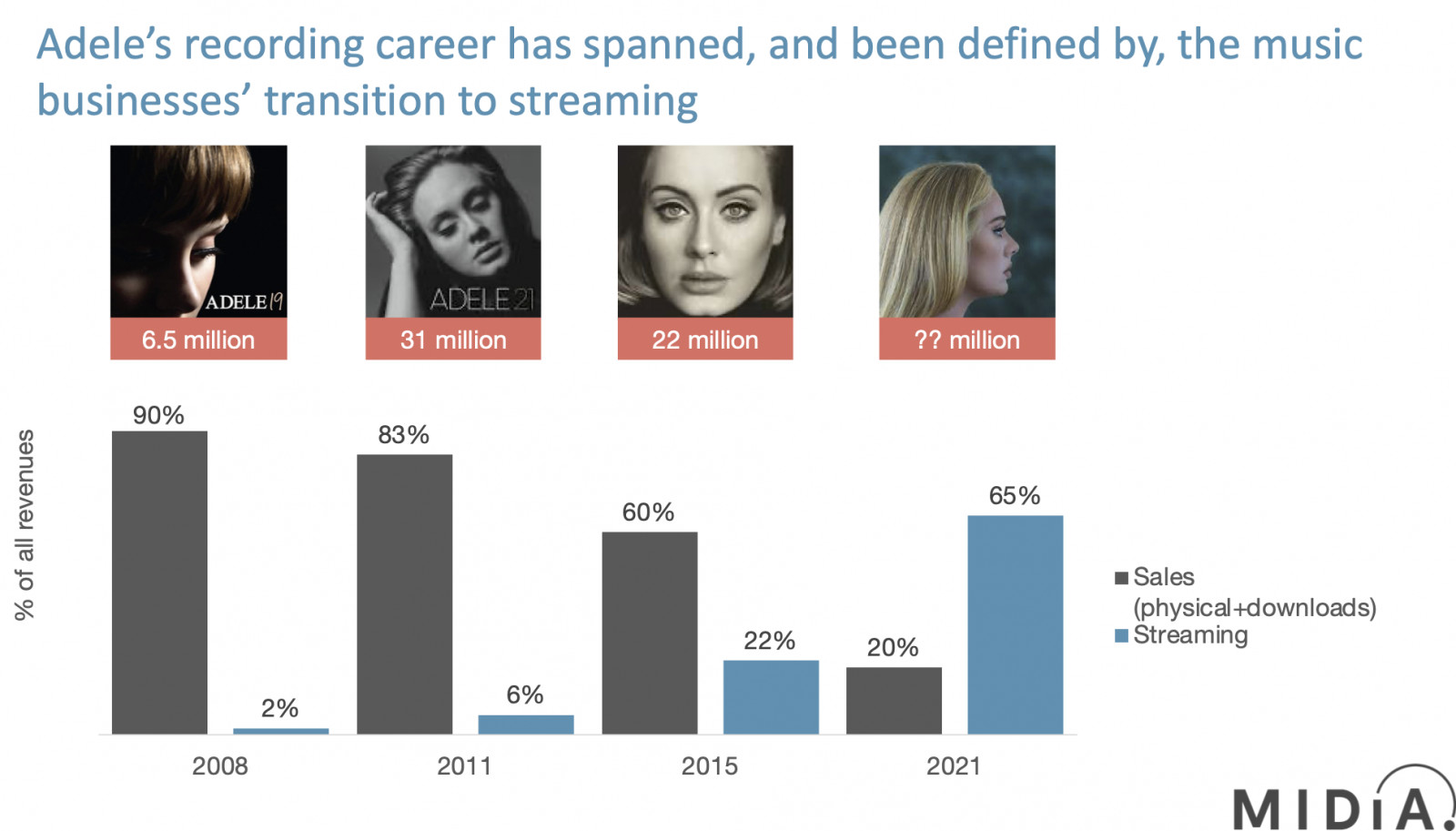 Adele is something of an anomaly in the modern music business, a throwback to how things used to be. These days even the biggest artists struggle to get mainstream attention for their new releases in a flooded market that is defined by more releases than ever before, and the ‘always on’ artist who is continually releasing new music and talking to their audience. Adele, though, follows the old model of landmark releases every half a decade and, up to now, she has managed to make it work by creating a cultural zeitgeist that the world opts into at scale. But the world has moved on a lot since her 2015 release, 25, and the nagging question is whether she can do it again with 30 in the much-changed music world.

Adele’s album releases act as chapter markers for the evolution of the recorded music market. Back in 2008, when 19 was released, it was still a sales (physical and downloads) and album dominated world. 90% of global revenues were from sales, while streaming was just 2%. With each half-decade release, the music world had moved on. Indeed, it could be argued that the biggest risk was with 25 in 2015, when streaming was already more than a fifth of revenues, and physical sales had fallen by 44% from 2008. Yet the album still managed to rack up 22 million sales and, in turn, became one of the biggest selling albums of the millennium. Adele bucked the prevailing industry trends.

Streaming does not favour albums

Fast forward to 2021 and the world has shifted even further, with 65% of revenues coming from streaming, and sales accounting for just a quarter. This is a dramatically different music world from the one in which 25 was released. Streaming will be the main way in which success is measured. Yet, just 15% of people listen to full albums on streaming services, so either Adele pulls an Ed Sheeran and has her entire album dominate the most streamed song charts (a possibility, but not a probability), or she has a few really big songs that rack up big streaming numbers. And to do that, she has to perform like a streaming-era artist.

Right now, Adele has two songs on Spotify with a billion streams. Compare this with Travis Scott who has three songs, two of which are more than 1.5 billion. Or Ed Sheeran, who has five songs, one of which is about to hit three billion (Shape of You). Heck, even Marshmello has three one billion stream tracks, of which one has 1.5 billion. No offence to Marshmello, but Adele will be expecting to have bigger cultural impact than him. It should be achievable (assuming that the music is strong enough), if for no other reason than the fact that there are three quarters of a billion more people streaming than in 2015.

Cultural impact will be the truest measure of success

But even if she does catch up on streaming figures, that probably is not how we should measure Adele’s success. In today’s world of fragmented fandom, fandom is defined by cultural movements rather than cultural moments. This is a dynamic that is intensified by the fact that media is also far more fragmented. Audiences are spread more thinly across a much wider range of platforms, shows and apps. It is simply much harder to create cultural moments. But that is exactly what Adele’s team will be planning to do. And given the current media buzz, she looks on track to do so once again, supported, as ever, by a simple but clever marketing campaign.

Recently, Adele has become much more visible, using Instagram and Facebook Live, pushing herself back into the public consciousness and even playing into meme culture. Beyond the music itself, it will be the continued use of social media, coupled with meeting the eager demand of traditional media that will determine whether 30 can become the sort of cultural phenomenon that 21 and 25 were. The fact that she still sings from the heart and is so relatable gives her an authenticity that is so often thin on the ground with today’s pop stars.

So, the success of 30 will probably be best measured in terms of whether there is a genuine cultural moment. In short, how long will Adele’s music and her team be able to maintain global interest and relevance? Success may be more about whether, two months down the line, we still have memes flooding TikTok and James Corden doing skits. This will say as much about how the world is responding to her music than how many streams she clocks up. And, of course, I have not even mentioned sales – not by accident. These metrics are just not going to be the way to gauge her success anymore (even considering the industry’s obsession with artificially boosted ‘sales’ figures with ‘sales equivalent streams’).

Adele has always been something of an anomaly, finding success through the power of her music rather than by playing whatever the latest marketing game is. Of course, expect every contemporary marketing card to be played (especially TikTok). But it will be through cultural impact, not streams, that we will truly understand how loudly her music still speaks.

by Hanna Kahlert
14 Oct 2021
Earlier this week MIDiA highlighted how the format of content is gradually eroding , so much so that a TV series, like Squid Game , can reach bigger audiences and generate more conversation than the decades-old...

by Tim Mulligan
12 Oct 2021
As video entertainment returns to pre-lockdown consumer choices between home-based, predominately digital, content offerings, and the ‘in real life’ (IRL) appeal of the cinema, the quality of the content...

John Kauchick
15 Oct 2021
There must be massive number if pressings. All the usual outlets: Amazon, Walmart, Target with exclusives. Plus, online record stores selling the black vinyl. Her store has exclusive cassettes. This is just the begining. Billie Eilish had 68k vinyls week 1. Adele may double or triple that?
No thanks