YouTube’s Super Chat Is A Guerrilla Marketing Gift To Advertisers Super Chat is an interesting attempt at monetizing mobile messaging and live video both, for creators and YouTube. The company has announced its launch this week in 20 countries, giving creators and communication-thirsty superfans a reason to celebrate. But looking deeper into the offering prompts further thinking about some potentially unanticipated consequences for YouTube, as it may have just created its ad revenue cannibal. 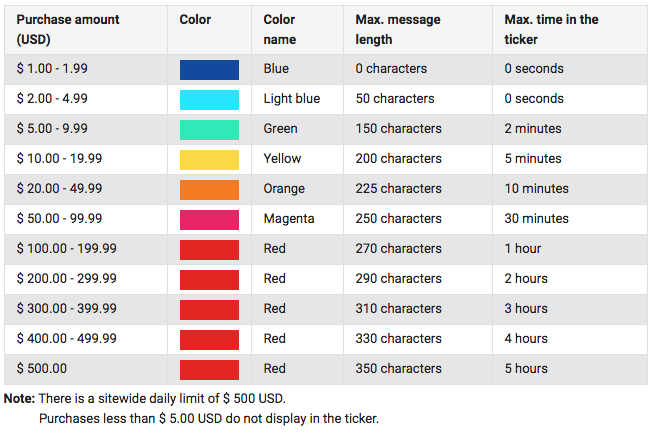 For a user’s post to stay pinned in the ticker for 2minutes (minimum time available), users have to donate at least $5. For half an hour the price goes up to $50 and for $500 your post can be pinned for 5 hours.

The non-pinned text-less donations are available between $1 and $1.99. For $2 your message will be highlighted, but will disappear as fast as any other message in the feed.

Data from MIDiA Research shows that 41% of YouTube Users spend money on or in apps every month. However, 93% of those mobile spending YouTubers spend less than $10 per month. With only 7% spenders paying more than $10, it is safe to assume, that already by $100, the penetration becomes negligible. But there are still 4 other, more expensive price tiers on offer. While YouTube may be trying to tempt its superwhales, the much larger segment most likely to regularly pay for these high-end tiers, are advertisers. Which will squeeze out the fans themselves and reduce the effectiveness of what the feature was meant to be in the first place.

There are plenty of companies who would pay for their message to be pinned to the top of a super-engaged live feed, watched by tens or hundreds of thousands viewers. At $500, a 5 hour slot to place a company message on top of the live feed can be an appealing proposition, depending on how many viewers are watching and who they are. And here lies one of the Super Chat’s distinct selling points to potential advertisers. While marketers do need to place any campaigns during the live stream (no-prebooking), it gives them the advantage to visit and assess the live size of the audience, the suitability of content and the liveliness of the chat-feed, before they decide to place the campaign.

Because of the live nature, many of these opportunities come on an ad-hoc basis. Thus taking full advantage will require flexibility and agility from the marketer teams. However, seizing the right opportunity can reap huge benefits for the advertiser. Furthermore, there are lots of events (some of the most popular ones), the live stream of which can be anticipated far in advance, so preparations can be made. Think of live streams like the US presidential inauguration, sports events, festivals or e-sports.

Furthermore, the campaigns have the potential to appear native and non-intrusive. That’s because Super Chat is presented as a feature for users, not advertisers. Paid messages therefore will not carry any labels clarifying that the message could be an ad. And because Super Chat sells messages, not banners, advertisers can appear as native users and produce a much more native sounding copy.

Two things remain unclear with regards to the opportunity:

From the end consumer side, we expect the donations to remain a niche activity in the short term, with the vast majority not exceeding $10 per donation. But if enough advertisers warm up to the top price tiers, there may be a much more significant revenue opportunity on the table for the creators. As for YouTube, there is a risk of unanticipated consequences: One is cannibalizing its own ad revenue, as some advertisers may decide to shift ad budgets to engage in guerrilla marketing via the Super Chat feature. Secondly, if professional marketers ultimately take over the most exclusive ticker slots, it may alienate users whom this feature was originally dedicated to.